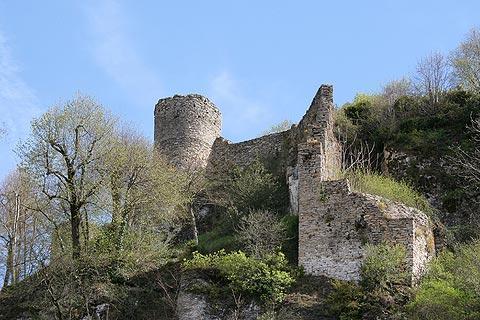 The town of Cremieu is located to the east of Lyon, in the Rhone-Alps region of eastern France. The town developed in the 13th century, initially around a benedictine priory built on the cliffs, then later around a castle, and each century since has left its mark on the town of Cremieu that we visit today.

Cremieu is an attractive town with an interesting medieval centre to explore inside the original 14th century medieval ramparts - it is said that the ramparts are among the longest still in existence in France. Ask at Cremieu tourist office for a guided map so you don't miss the highlights that are sometimes a little bit hidden away in the backstreets

There are several defensive towers and gateways incorporated within the fortified walls of Cremieu, of which the 14th century Porte de la Loi was the original main entrance to the town (although the walls are missing here the gateway is still intact). The 'Tower with Windows' is one of the most interesting to be seen, while another is the so-called 'mushroom tower'.

As you explore the old town in Cremieu you will see lots of attractive medieval houses, many with small interesting features to enjoy, such as attractively carved doors and ancient shutters. There are some houses that deserve particular attention, such as the Maison de Martinas in the Rue du Marché-Vieux which is one of the oldest houses in the town and has an ornately carved series of windows.

Other important structures include the very substantial covered 15th century market hall, built in stone and wood and with impressive carpentry work supporting its lauze roof, and the fortified church.

The original 12th century benedictine priory, long since abandoned, stands in majestic ruins on the Saint Hippolyte hill. Because of its long history as an important religious centre, there are two other important convents to see in Cremieu:

You can also visit the 13th century Dauphin Castle that once played an important role in the struggles between the Dauphins and the Savoys and their efforts to control the region, a struggle that ended with the important Treaty of Lyon being signed at the beginning of the 17th century. After three centuries of neglect the castle was renovated in the early 20th century.

Wednesday is market day in Cremieu if you want to do some shopping while being part of a 500 year old tradition - but there are plenty of shops and restaurants in the town whichever day you choose to visit.

This area to the east of Lyon is perhaps not the most visited region of France but there are some charming places to discover if you are here, the pretty village of Perouges among them. Your children might prefer to spend the day at the Parc Walibi Rhone-Alpes Theme Park!

You can find more travel ideas in the Isere guide and the Rhone-Alpes guide.

Map of Cremieu and places nearby

Visit near Cremieu with France This Way reviews

... or see ALL recommended places to visit in Isere

Cremieu is classified as a recommended detour town (plus beau detour)

Plan your visit to Cremieu, Isere

Regular market(s) are held in Cremieu each Wednesday. (Markets are held in the morning unless stated.)

The French version of this page is at Cremieu (Francais)