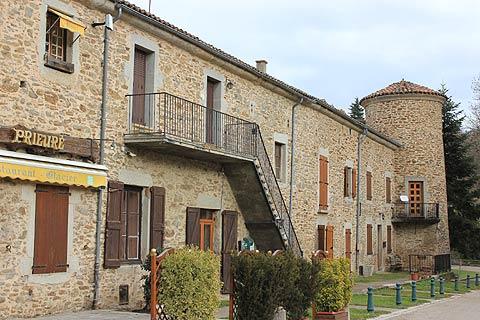 The Loire department has very diverse scenery with the Monts and Plains of the Forez area, the Monts de Beaujolais and the Gorges de la Loire. In the south is the Pilat area, a pretty regional park. Trees cover much of the higher ground as well as a protected area of moorland in the Monts du Forez. Orchards and vines are common on the lower slopes.

The Loire department is situated in the western Rhone-Alpes region of south-east France, with the Rhone department to the east and the Ardeche to the south. The river Loire travels the length of the department from north to south and gives the department its name.

The department is made up of several distinct regions with their own particular highlights.

Below we look at the highlights of each of these regions:

One of the high points of this area lies just to the south of Roanne along the edge of the Loire river. St-Jean-St-Maurice-sur-Loire is a delightful village which climbs steeply up to its ruined castle. South of here and jutting into the river is the splendid Chateau de la Roche with its turrets looking very attractive against the backdrop of the river and its wooded banks.

Another delightful village is St-Haon-la-Chatel, a fine example of medieval and Renaissance architecture. Other villages worth visiting are Charlieu, at the northern limit of the department, with its half-timber houses, Ambierle with its beautifully patterned church roof, and Le-Crozet which as well as medieval architecture offers great views over the surrounding countryside.

We also recommend you visit Benisson-Dieu to see the abbey, a historic monument with its characteristic roof recalling those we expect to see in Burgundy.

Sitting below the narrow gorges Roanne occupies a strategic position on both the Loire river and a canal. It is a well known centre of gastronomy.

On the western edge of the department is the area called the Monts du Forez. This chain of mountains stretches through parts of the Loire, the Haute-Loire and the Puy-de-Dome departments. It is situated to the north-west of Saint-Etienne and reached via the col du Béal (to the north) or Baracuchet (to the south).

The highest mountain here is the Pierre-sur-Haute (1634 metres) which is surrounded by large stretches of moorland: les Hautes-Charmes. Much of this is now a nature reserve in order to protect these high moorland areas. Numerous long distance trails are accessible (notably the GR3) and it is possible to eat in the « jasseries », establishments typical of Auvergne and Pays de la Loire which serve a local traditional cuisine such as the « patia » (potatoes with cream), the Fourme d’Ambert and the Montbrison.

The Monts du Forez are also popular with skiers during the winter and there are ski-stations at Chalmazel and Prabouré. The exposed plateau are suitable for snowkiting because of the clear terrain, devoid of any vegetation, and their exposure to the wind. Cross-country skiing is also possible on the Cretes du Forez and various cols.

Finally there are villages with a medieval character such as Marols and Montarcher to the south of the Monts du Forez which can be visited all year round.

Below the Monts du Forez lie the large Plains du Forez. These are quite industrialised and built up in the south but more rural in the north around the towns of Feurs and Montbrison with its impressive Collégiale Notre-Dame d’Espérance and its town centre centred around the Vizézy, a tributary of the Loire.

A highlight of this area is St-Bonnet-le-Chateau with its excellent medieval quarter and its position on a small hill giving it sweeping views over the plains. Further north, Cervieres with its chateau and ancient houses is very well preserved and Pommiers is built around a monastery. Other chateaux worth visiting are the elegant Renaissance chateau with attractive gardens, the Château of the Bâstie d’Urfé near Montverdun; and the Chateau de Couzan, a medieval fortress at Sail-sous-Couzan.

Several small villages also have priories and churches that are open to the public such as those at Champdieu or Saint-Romain-le-Puy.

Saint Galmier is a spa town and popular village to visit and is the source of the sparkling mineral water 'Badoit'. Another thermal town in the plains is Montrond-Les-Bains, known for its spa and casino.

To learn more about the life and rural traditions of the Loire it is possible to visit the Eco Museum at Usson-en-Forez.

Finally the écopôle of Forez on the edge of the Loire in ancient gravel pits has the largest bird reserve in the Rhône-Alpes region. Various trails organised around the site allow you to observe the flora and fauna, in particular during the periods of migration and nesting.

This is a pretty area of rolling countryside dotted with pretty villages. Pouilly-les-Feurs is a pretty village founded by the monks of Cluny. Its 14th century priory is developed as a centre of information about the Montagnes du Matin which form the eastern edge of this area. St-Marcel-des-Félins to the north has a small chateau in the centre of the village and holds an important walking event every 1st May.

In between these two villages Neronde is also worth a visit to see the remains of its fortified walls and towers and to admire its half-timber houses.

The small villages of Panissières and Violay at the extreme east of the Loire department have impressive views across the Plaine du Forez, and the Hat Museum at Chazelle-sur-Lyon is entertaining for young and old alike.

The Pilat and Saint Etienne are in the south-east of the department. Saint Etienne is the capital of the Loire department. Whilst not really a tourist town - it grew up as an industrial town based on the diverse industries of arms and ribbon manufacture - it has an attractive centre around the Place Jean Jaures and the "City of Design".

The Pilat is for the most part a Regional Natural Park to the south-east of Saint-Etienne. It is a hilly area with wooded slopes and rocky outcrops giving way to gentler slopes often covered in apple trees or grape vines. At its highest point the 'cret de la Perdix' reaches 1400m high. This is a popular area with cyclists in the summer and in the winter the Monts de Pilat are popular for cross-country skiing.

Dotted around 'the Pilat' are a number of attractive villages including, on the western edge of the park, Sainte-Croix-en-Jarez which is listed as one of the 'most beautiful villages of France'. On the eastern edge are the charming village of Malleval and the town of Pelussin with its small chateau, the chateau of Virieu.

Also worth visiting in the Pilat area are St Paul en Cornillon with its wonderful position perched on a rocky outcrop; Rochetaillée with its remains of a feudal chateau and Chambles with its incredible views over the 'gorges de la Loire'.

It is for the countryside in particular that you will want to visit this area and some particular landmarks are 'Les trois dents', a rocky outcrop looking like three teeth sticking up along a ridge; the 'Saut de Gier' which is a tall waterfall which is a thin trickle in the summer but very attractive in spring when it grows in volume. Quite rare but found in the Massifs de Pilat are hillsides covered in cubes of rock formed in the ice age with the action of cold on the rocks. These are called chirats and can be seen at the Cret de l'Oeillon and close to the Saut de Gier.

The Maison de la reserve naturelle des Gorges de la Loire at Saint-Victor-sur-Loire is a useful starting point if you wish to explore the gorges. This is very close to St Etienne.

Just north of here the gorge widens out into a small lake, the Lac du Grangent which has a couple of viewpoints with excellent views. There is also the Chateau d'Essalois which also offers great views over the lake.

Chambles is a beautiful medieval village at the southern end of the lake which also offers great views over the lake and gorge.

Map of Loire and places nearby