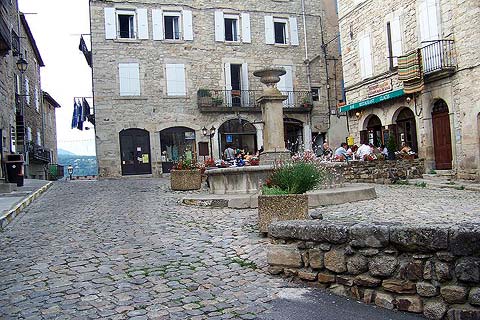 Joyeuse is a large village on a hill above the picturesque Baume River in the south-eastern Ardeche department (region Rhone Alps), about 25 kilometres south of Aubenas and to the north-east of Les Vans (see Naves). The village falls withing the Natural Regional Park of the Monts d'Ardeche.

According to legend, the town was founded by Charlemagne in 802 after he lost his sword while hunting nearby - his sword, called Joyeuse, was found and in celebration Charlemagne gave the territory to the knight who had found the sword. The knight developed his property here and the town later developed around the site.

Your visit to Joyeuse will focus around the medieval city, which in turn developed around the castle at Joyeuse which still dominates the town. 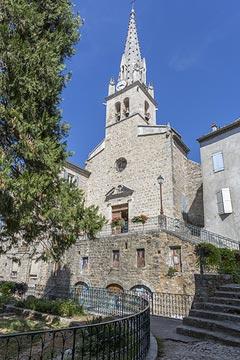 There is much to enjoy as you explore the narrow medieval streets, some of them cobbled, and passing under vaulted buildings, passing many interesting old buildings and culminating in the Recluse Tower. There are also quite a few shops and cafes etc focussed around the market square in the centre of the village.

Joyeuse castle itself is a 16th century reconstruction of the much earlier castle that originally stood in the same location. By the time the castle was rebuilt the need for a defensive castle had passed and the emphasis was more on comfortable living than on defensive capabilities. The castle now acts as the town hall for Joyeuse.

Other notable highlights to discover here in Joyeuse include the gothic style Church of Saint Peter (17th century); the 'Hotel de Montravel' (a building dating from the 14th century, but with a facade rebuilt in the 18th century); and the College of the Oratoriens (17th century).

Significant parts of the original town fortifications can also be seen around Joyeuse medieval centre, dating from the 14th century.

Market day in Joyeuse is a Wednesday. 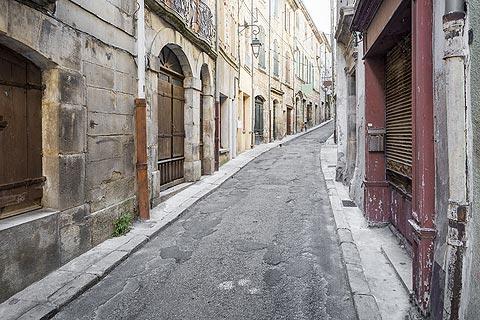 River bathing in the Ardeche river is a popular activity with visitors in the region around Joyeuse, especially those with children on a hot summer day!

There are also many interesting historical villages to explore in the region around Joyeuse. You can see details of some of these at 'Ardeche villages of character'. The villages of Labeaume and Balazuc are among our personal favourites.

Map of Joyeuse and places nearby

Visit near Joyeuse with France This Way reviews

Plan your visit to Joyeuse, Ardeche

Regular market(s) are held in Joyeuse each Wednesday. (Markets are held in the morning unless stated.)

The French version of this page is at Joyeuse (Francais)