One of the most fascinating and scenic regions of France, this extensive medium-altitude region encompasses scenic landscapes of enormous diversity from the volcanoes of Puy de Dome to the Gorges de l'Ardeche, and many attractive hamlets and villages, often tucked away in remote locations. One of our personal favourites!

Characterised by its landscapes and altitude, the Massif Central is an extensive region of south-central France at a raised altitude and with a landscape of gorges and deep valleys, high wind-swept plateau and craggy rocky areas.

It is this variety of landscapes that makes the Massif Central so interesting. It includes such diverse highlights as the Gorges du Tarn, the volcanic landscapes of the Puy-de-Dome region, the exposed plateau around Mont Lozere, the scenery along the Upper Allier River, the stunning Gorges de l'Ardeche...and much more.

Although we are at quite a high altitude there are few 'high mountains' in the Massif Central as we see in the Alps, and the landscape usually simply becomes more barren and exposed at the higher altitides. 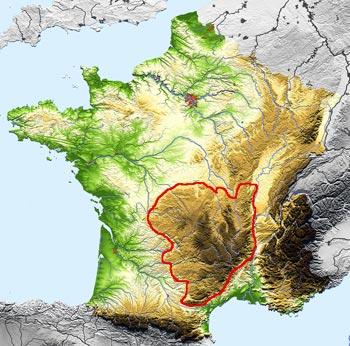 The Massif Central encompasses much of the Limousin and Auvergne regions of France, and also parts of Languedoc-Roussillon, Midi-Pyrenees and the Rhone-Alpes.

You can see the region highlighted on the relief map of France to the right - it covers about 15% of the surface of mainland France.

Such an extensive region can not be fully explored during a two week visit. The nature of the terrain means that roads are often slow and sometimes steep and narrow, even between places that appear quite close on the map.

The altitude also means that the weather can be cold and wet for a large part of the year and the season for visiting the region is shorter than in many regions of France. We would suggest visiting between late June and early September if possible.

Deciding where to visit

We review the important scenic highlights of each region and department within the Massif Central below, and when you have decided which area to visit you can find more information in the individual department travel guides.

Massif-Central by region and department

Note that we have mentioned scenic highlights below for each department and region but not many of the towns, villages and attractions that also contribute so much to a visit - see the individual department travel guides for places to visit and other highlights.

The principal natural highlights in the Allier are to the north of the department.

In this region you can explore several different protected areas including ancient forests, moors and woodlands, and a traditional unspoiled countryside of small villages and farms.

Most visits to Cantal fall within the north of the department which is part of the Regional Natural Park of the Volcanoes of Auvergne and also part of the Monts du Cantal region of hills.

There are several notable highlights including the summits of Puy Mary and the Plomb du Cantal, both offering exceptional views across the Massif central.

The Haute-Loire department is centred around the pilgrimage town of Le Puy-en-Velay.

The scenery in the department is dominated by the valleys and gorges created by the Allier and Loire rivers, with the Gorges of the Haute-Allier being among the scenic highlights.

To the east you can explore the peaceful unspoiled landscapes of the Parc du Livradois-Forez, while to the west the National Parc des Volcans is the highlight, above all for the views across the extinct volcanoes from the summit of Puy-de-Dome.

The northern part of the Aude department falls within the Massif Central and includes the steep wooded hills and small hamlets of the Montagne Noire region.

The northern Gard is the southern edge of the Massif Central and includes caves of Aven d'Orgnac and the Gorges de l'Ardeche on its northern border with the Ardeche department. The National Parc des Cevennes also falls partly within Gard.

Further north-west there are several scenic highlights including the Cirque de Navacelles, the Abîme de Bramabiau and Mont Aigoual.

In the north-west of the Herault department you are within the Massif Central, where you will discover picturesque small villages unchanged with the centuries.

Scenic attractions here include the Cirque de Moureze to the west of Clermont l'Herault, the Gorges de l'Herault and the Lac de Salagou as well as various cave systems.

The principal scenic attraction in the Lozere department is the spectacular Gorges du Tarn, and to a lesser extend the other gorges such as the Gorges de la Jonte. The gorges include several attractive towns and villages such as Sainte Enimie (a classified most beautiful village), Florac, La-Garde-Guerin and Castelbouc.

To the north of the Correze you will find the extensive Regional Natural Park of Millevaches, an exposed flat area of woodlands and marshes, and the hills of the Massif de Monedieres with their far-reaching views to the west.

Further south the landscape is typically one of steep wooded valleys and fast-flowing streams, much like the adjacent Dordogne department.

The northern part of the Regional Natural Park des Millevaches is within the Creuse department, including Vassiviere Lake which falls on the border and is the largest lake in Limousin.

Another natural highlight is the Pierres Jaumatres, an area of huge granite boulders created by millions of years of erosion.

In the north of the department you can enjoy the far-reaching views from the Monts d'Ambazac and Monts de Blond hills.

In the south of the Aveyron the scenic highlights include the cliffs, hills and gorges of the Regional Natural Park of the Grands-Causses, while to the north the exposed Aubrac Plateau has its own special charm.

This part of the Massif Central is also noteworthy for having several villages classified among the 'most beautiful villages in France': Conques, Estaing, Belcastel, Saint Eulalie d'Olt and Saint Come d'Olt. and the picturesque village of La Couvertoirade, north of Lodève.

For a more modern attraction in the south-west of Aveyron be sure to visit the dramatic Millau Bridge, the highest road bridge in the world.

Much of the Lot department falls within the Regional Natural Park of the Causses de Quercy, an attractive area with very varied scenery from gentle hills to steep craggy slopes and cliffs.

In the south of the department you can explore the scenery and villages along the Lot valley while to the north the steep forested slopes and cliffs around the pilgrimage town of Rocamadour and the caves at Padirac are very popular.

The eastern Tarn is within the Massif Central and the Regional Natural Park of the Haut-Languedoc.

The landscape becomes progressively more dramatic as you travel east through the Sidobre region and enter the Monts de Lacaune and Montagnes Noires regions of low mountains and deep valleys.

The eastern part of the Tarn-et-Garonne department around the lovely historic town of Saint-Antonin-Noble-Val falls within the south-western corner of the Massif Central.

It is an interesting region of small picturesque villages, hills and woodlands that is very attractive to explore.

The Ardeche is one of the most visited departments in the Massif Central, in particular the south of the department because of the very scenic Gorges de l'Ardeche, a very beautiful gorge 40 km long starting from the natural stone arch at Pont d'Arc.

There are many other scenic highlights in Ardeche including the Regional Natural Park of the Monts d'Ardeche and several of the most interesting cave systems in France.

Another highlight in Ardeche is the group of villages that are together classified as 'Ardeche villages of character' - there are 17 of these villages, each has its own particular charm and many are in very scenic locations.