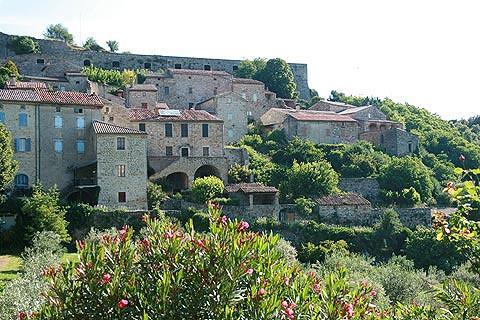 The Ardeche has a landscape that includes rolling hills and forests, open moorland and small scale farming, and craggier landscapes with cliffs and steeper hills. There are lots of picturesque ancient villages to explore and the department also includes one of the most scenic highlights in France - the Gorges of the Ardeche - unmissable! 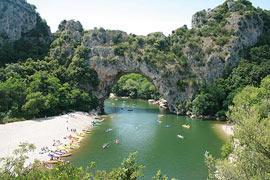 The Ardeche department is in southern-central France where it forms the south-west corner of the Rhone-Alpes region, and also forms the south-eastern part of the Massif Central region.

It is the south and west of the department that attracts the majority of visitors, and it is here that you wiil discover most of the places of interest including the Gorges de l'Ardeche, and the more mountainous Regional Natural Park of the Monts d'Ardeche.

There are also numerous small villages and towns to discover and explore throughout the Ardeche, including the designated 'Ardeche villages of character' (see below), along with the larger towns of Privas (to the east), the historic centre of Largentiere and the nearby village of Taurieres; Charlemagne's town of Joyeuse.

Other towns to explore if you are passing include the cathedral town at Viviers and the popular spa town at Vals-les-Bains has some interesting belle-epoque architecture.

Most visitors will want to visit the Gorges of the Ardeche that follow the southern border of the department, and it is often this dramatic scenic highlight that attracts visitors in the first place. Either driving along the top of the gorges, or canoeing along the Ardeche river itself, the scenery is very memorable.

The 'base town' for exploring the gorges is the lively town of Vallon Pont d'Arc, while a few kilometres to the east, at the entrance to the gorges, the impressive stone arch at Pont d'Arc has a popular river beach.

See Gorges of the Ardeche for more details.

Scattered across the Ardeche there are numerous attractive villages, many of which you will come across simply as your are touring, or because they are near your accommodation.

To make your task of exploring easier, the Ardeche tourist board have designated selected villages as 'villages of character'. These are particularly noteworthy due to their focus on preserving the historic setting and appeal of the village and / or for being in exceptional settings.

See Ardeche villages for more details and a map.

Ardeche caves and other natural highlights

While the Gorges attract the most attention we do recommend you take the time to explore some of the the other natural highlights of the department - there is a lot to see and enjoy!

Close to the Pont d'Arc are three of the most interesting cave systems in France:

- the Regional Natural Park of the Monts d'Ardeche in the south-west (a good introduction to the park if exploring by car is to follow the N102 road between Pradelles and Aubenas, which is very scenic but unfortunately doesn't have many stopping places);

- the Bois de Paiolive is a fascinating area of forest in the south-east of the department (near Naves) with lots of curious shaped rock formations scattered between the trees;

- the Gorges du Chassezac near Aubenas are scenic gorges with river beaches and the ruins of the village of Cornilhon, abandoned since the Middle Ages

- the Mont Gerbier-de-Jonc is an extinct volcano with a dramatic shape to the west of the Ardeche. There are great views from the summit and it is also the source of the River Loire, the longest river in France. Mont-Gerbier-de-Jonc is the second most visited natural highlight in the department after the Gorges de l'Ardeche.

Towards the north-east of the Ardeche we enjoyed exploring the town of Tournon-sur-Rhone, and also the villages of Lamastre and Nozieres (which both have ruined castles around which the villages originally developed).

Close to Tournon-sur-Rhone at Annonay the Safari de Peaugres is a zoo and wildlife park that has many species of animals (such as zebras, elephants and wolves and many smaller species) and includes a section that you explore in your car. From Tournon you can also take the steam train that explores the scenic Gorges du Doux.

You will also find lots of local activities such as treetop adventures, small animal parks, heritage museums and so on.

Map of Ardeche and places nearby

See an index of all Ardeche communes