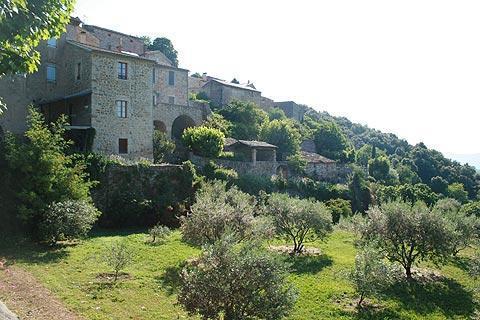 Banne is a village found at the south-eastern edge of the Ardeche department and on the edge of the Cevennes to the south of Naves, and is listed as one of the Ardeche 'villages of character'. Even as you approach the village and the road climbs rapidly through the rocky hills you can guess that it will have far-reaching views across the region. You are not to be disappointed.

The village is perhaps better thought of as two small villages a few hundred metres apart on a ridge. There is a central square in Banne with shady trees, benches and great views: in one direction from here is a cluster of houses around the church, and in the other direction is the older part of the village, around the ruins of the castle that once stood here. 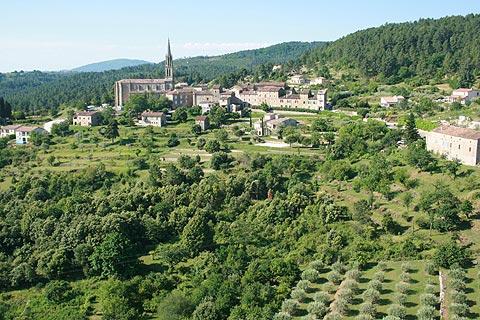 Both parts are of course well worth exploring, although the part around the castle is perhaps the most interesting, principally because the houses are older and more traditional of Ardeche village houses. On this 'castle side' of Banne, there are a few streets winding through the ancient houses that you climb to reach the ruins.

Just beyond the castle there is a 'table d'orientation' to help you identify the far off mountains that stand before you.

The castle itself is of limited interest, with little left standing, although the information board shows that it was at one time a very grand structure. Banne castle was destroyed in 1792 following the French revolution, firstly by a great fire started by the revolutionary forces after several days of siege, then a few days later following a decree it was destroyed almost completely.

The Count of Saillans and his colleagues, who had tried to hold out against the revolutionary army, were captured and beheaded.

After exploring and back in the central square at Banne you will find a small cafe.

France This Way comment: many of the 'most beautiful villages of France' and 'villages of character' that I have visited are described as having great views. Just to be clear - Banne is among the very best! The far-reaching views in all directions are unspoiled at all times and are truly exceptional. Unfortunately my photos don't begin to do them justice so you will have to visit yourself... 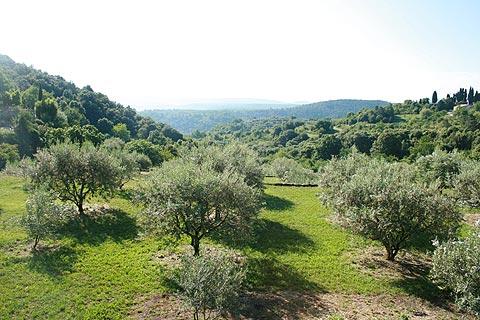 You will find a lot of possibilities in the region around Banne if you enjoy pretty villages and scenic wonders. One popular attraction is the scenery of the Bois de Païolive with unusual shaped boulders distributed throughout an ancient forest.

Among our favourite villages near here is Labeaume, in a picturesque riverside setting, while the scenic highlights of the Gorges de l'Ardeche are just a short drive to the east of Banne.

Map of Banne and places nearby

Visit near Banne with France This Way reviews

Plan your visit to Banne, Ardeche

The French version of this page is at Banne (Francais)