The resort was developed in an attractive location in the mountains above Les Brevieres and around the lake after the dam was finished.

Tignes comprises of several villages - all are new except for Les Brevieres which is a traditional Savoyard village. Tignes was also a village here but it was submerged in the early 1950's when the barrage was constructed.

The main villages are called Val Claret, Le Lavachet, Le Lac, Les Boisses and Les Brevieres, the first three of these being at the higher altitude and the last two a little down the mountain. Le Lac is both the highest village of the group and the best placed for access to the ski slopes. 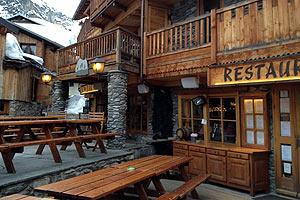 Having been developed during the 1960's Tignes is one of the longest established ski resorts in the Alps . It was becoming 'rather dated' by the 1990's but in recent years the resort has been taken in hand, substantially smartened up, and new developments are subject to much tighter constraints than were applied previously, in an attempt to return to a more Alpine feel for the resort.

For a long time the location was unusual in that it offered year round skiing, because of the glacier that lies behind the village - climate change has reduced this a little but there is still a very long ski season at Tignes, typically mid-October to Mid-May, and skiing on the glacier is available in other months.

The region is ideal for skiing, is at high altitude (2100 metres), and has a very wide range of skiing opportunities for all levels of skier - for the more experienced there are a good selection of green runs and black runs, and off-piste possibilities close to hand.

Tignes also claims to be the sportiest ski resort in France, and you will find many other activities here such as hang-gliding, climbing, ice-skating and mountain bike riding on snow. There are also two snowparks and a full 'half-pipe' for the more adventurous.

Perhaps the most unusual sport at Tignes, and I can confirm that I have no intention of trying it although those that have say it is exceptional, is 'under ice diving'.

Because of the late season skiing available, and the popularity of the resort as a summer base both for glacier skiing and for hiking and other outdoor activities, the town is busy for much of the year, except autumn when the summer crowds have left and the first winter sport enthusiasts not yet arrived. 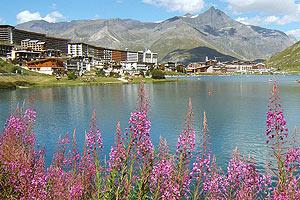 The resort of Les Arcs Bourg-Saint-Maurice is to the north-west and Val d'Isere is just a few kilometres to the south-east of Tignes.

Map of Tignes and places nearby

Visit near Tignes with France This Way reviews

Plan your visit to Tignes, Savoie

A seasonal market is held in Tignes on Sunday.

A seasonal market is held in Tignes on Thursday all day & Sunday. (Markets are held in the morning unless stated.)

The French version of this page is at Tignes (Francais)