Meribel falls within the western border of the Vanoise National Park. It is to the east of Chambery and south of Albertville. It is one of the most presitigious ski stations in France, and one of the most in keeping with its surroundings.

As an interesting historical note, Meribel was founded in the 1930s by a Scotsman, Peter Lindsay, because the Austrian resorts were becoming very popular with Nazis in the years before the war. Although development of the resort was halted during the war years, it recommenced in 1946 and Meribel quickly became a popular destination.

The main resort actually consists of several villages called Meribel Village (1400 metres altitude), Meribel Centre (the main resort at 1500 metres), Meribel-Les Hauts and Meribel-Mottaret (the highest of the resorts, at 1800 metres) as well as the original village of Les Allues, further down the slopes. Together they form one of the largest and most popular skiing destinations and Alpine Ski resorts in France, with ski slopes from 1900 to 2900 metres altitude: 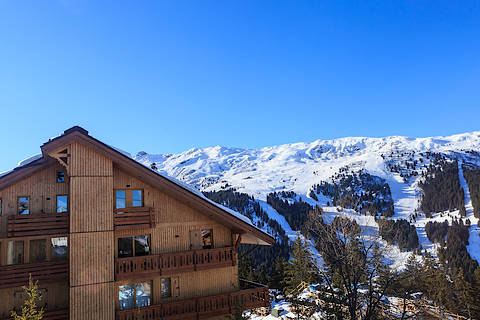 Less 'overdeveloped' than many of the ski resorts in the alps, Meribel has managed to conserve its Alpine village appearance very well - the buildings in Meribel follow the traditional style of architecture for the region, of wood and stone, rather than the concrete or high-rise apartment blocks that dominates some of the Alpine resorts. This does mean that Meribel is rather more spread out than most resorts in the Alps.

This attention to detail explains much of its popularity and Meribel is now one of the most vibrant and popular ski resorts in the French Alps, while also being popular with larger ski groups, and tends to be visited from Christmas right through to the end of April. It is also one of the most upmarket of the Alpine resorts.

Of course, all levels of skiing are available close to hand, along with plenty of off-piste opportunities and various related snow sport activities such as snowboarding and a snowpark and moonpark for enjoying jumps and freestyle skiing, one at Meribel-Mottaret (the snowpark) the other at Meribel itself (the moonpark).

Apart from skiing there are numerous other sports available, from ice skating to snowmobiles, from hanggliding to ice climbing. After all that exercise there are numerous leisure facilities available to help you relax including saunas, fitness centres and jacuzzis, and there are also plenty of shops and boutiques and popular bars and restaurants that will keep you entertained late into the night.

I was told that even if I stayed at Meribel for the entire winter season I could eat and drink in a different bar or restaurant every night. I am not sure if that is true but there is certainly a wide choice!

Meribel also has very good facilities for children, with clubs available for children as young as 18 months and offering a wide range of different activities. 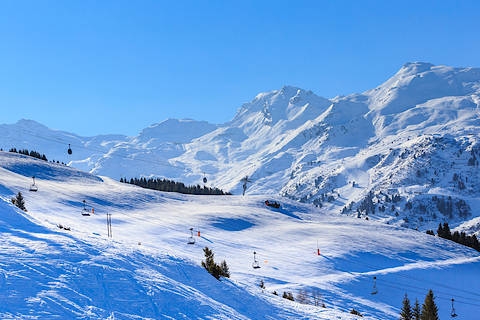 Meribel, along with neighbours Courchevel and Val Thorens, forms the ski region known as 'Les Trois Vallées' in the Savoy Alps and claimed to be the largest ski area in the world - so if you tire of Meribel there is plenty of variety nearby!

Map of Meribel and places nearby

Visit near Meribel with France This Way reviews

Plan your visit to Meribel, Savoie

The French version of this page is at Meribel (Francais)