Les Arcs is a very popular ski region in the French Alps, situated in beautiful mountain scenery at Bourg-Saint-Maurice in the Savoie department and close to Mont-Blanc - indeed there are views of Mont Blanc from various places in Les Arcs.

The resort of Les Arcs Bourg-Saint-Maurice

Les Arcs Bourg-Saint-Maurice itself falls into several distinct villages with each of the resorts linked to the others by a road and a frequent bus and cable car. From lowest to highest altitude these are Bourg-Saint-Maurice, Arc 1600, Arc 1800, Arc 1950 and Arc 2000. Broadly speaking, in order of ascending altitude:

The numbers in the resort names represent the altitude of the ski station. Overall the altitude of Les Arcs Bourg-Saint-Maurice varies from 800 metres (skiing from about 1200 metres) to just over 3000 metres above sea-level. 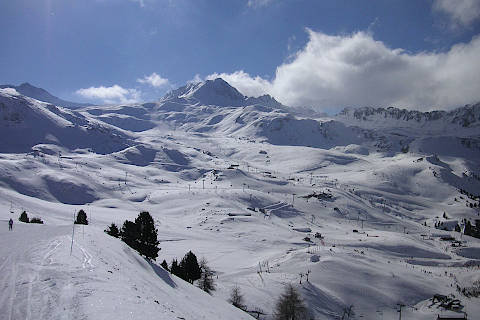 As well as skiing there are various other snow related sports available, such as the Snow Park and the Rodeo Park (luge), hiking and hang-gliding, and the chance to try 'speed riding' which combines skiing with paragliding, as well as numerous others. Of course all usual ski station facilities are available at les Arcs such as childminders and skiing lessons, ski hire and rental apartments.

Many of the buildings and apartments at Les Arcs are in an 'architect designed' style inspired by Le Corbusier, and some of the buildings have even won awards for their architecture and the entire site is officially listed as an important 20th century heritage site for its modern architecture.

Personally I prefer traditional lodges rather than modernist apartments but I'm probably old-fashioned, and certainly it is very appealing - nothing like the concrete jungles that some resorts developed into.

When evening arrives you won't be disappointed - there are numerous bars, cafes and clubs for the all important apres-ski. Each resort in the group has its own shops and facilities. Arc 1800 is the largest of these, while there are less shops at the two highest stations but all of the resorts have their own special appeal.

Really the choice of shops and restauraunts, bars and clubs, cinemas and boutiques exceeds that in many medium sized towns (there are more than 100 shops in Arcs 1800).

Note: Bourg Saint Maurice itself is below the normal skiing altitude in the region and there is a train that only takes a few minutes to zoom you up the mountainside from the station at Bourg-Saint-Maurice to Arc 1600.

Les Arcs is also a summer destination popular among those wishing to hike, cycle and explore the mountains, and several of the cable cars remain open to the public all year round. The station is generally open and active during July and August. 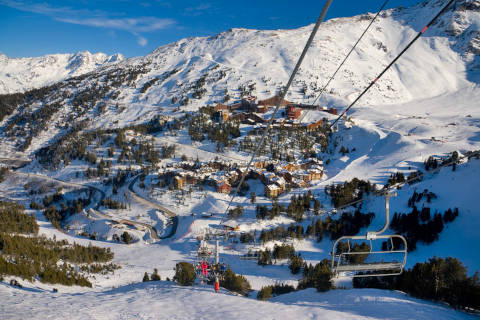 The resort is towards the east of the Alps and in the northern part of the Vanoise National Park. Val d'Isere is to the south-east and Courchevel to the south-west of Les Arcs.

The resorts that constitute Les Arcs Bourg-Saint-Maurice also form part of the extensive Paradiski region - which also includes La Plagne and Peisey-Vallandry and has been established to allow ski-routes and access between the resorts and offering a very wide range of slopes and facilities to visitors, and is one of the most extended and visited of the Alpine Ski resorts.

Map of Les Arcs and places nearby

Visit near Les Arcs with France This Way reviews

Regular market(s) are held in Les Arcs each Saturday. (Markets are held in the morning unless stated.)

The French version of this page is at Les Arcs (Francais)