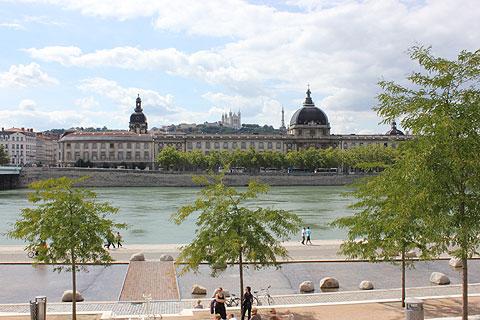 The Rhone department includes the historic city of Lyon and the rolling countryside of the famous Beaujolais wine region. Pretty villages in the land of the 'golden stone' make the area north of Lyon a pleasure to visit.

The Rhone department is situated in the Rhone-Alpes region of south-east France. It is in the north-western side of the region with the Burgundy region to the north and the Ardeche to the west. It is named after the Rhone river which crosses the department from north to south.

There are several distinct areas in the department and from north to south these are:

Below we consider the principal highlights of each of these regions.

The Beaujolais region is famous for its wines but is also popular with walkers and has a number of attractive villages.

Beaujeu is the historic capital of the Beaujolais region and has attractive stone and half-timber buildings in its centre. Vaux-en-Beaujolais is another pretty village, this one was the inspiration for 'Clochemerle' by Gabriel Chevallier. Thizy at the western limit of this area was once an important cotton weaving and trading centre.

The Pays du Pierres Dorées / Land of the Golden Stone

So called for its pretty villages built from golden stone from a nearby quarry. These include: Bagnols with its lovely church and castle;  Theizé with an attractive castle and a church with 17th century frescoes; Ternand which occupies a wonderful position surrounded by wooded hills and the perched village of Châtillon d'Azergues.

Oingt is one of France's listed 'most beautiful villages' and has charming narrow streets climbing up to the church and tower at the top of the village.

Along the Saone valley is the town of Villefranche-sur-Saone with its ancient houses on the Rue Nationale. Belleville is home to the 'Hameau Duboeuf', a park with themes of wine and railways and a popular day-trip for residents of Lyon. Anse was an important town in Gallo-Roman times and vestiges of its history are still present today.

Trevoux is a quiet town sitting on the banks of the Saone river but it has some very impressive monuments because of its historical importance as the ancient capital of the Dombes prinipality.

Chazay d'Azergues is a lovley village and if you climb to the top of the bell tower you can get some great views over its narrow streets and ancient monuments.

Lyon and the Rhone Valley

Lyon is France's third city. It is a UNESCO World Heritage site for its important historic architecture including the Croix-Rousse area which was once the silk capital of the world. Lyon's Presqu'ile area is the beautiful and thriving centre of the city nestled between the Rhone and the Saone river. Lyon hosts a spectacular Festival of Light every year around the 8th December. It is well worth seeing if you have the opportunity.

Eveux to the west of Lyon is home to one of Corbusier's buildings. The La Tourette monastery is open to visits making it possible to see his trademark windows and the simple, almost severe lines of his buildings.

South of Lyon are the extensive roman remains at St-Romain-en-Gal.

The Monts du Lyonnais offer great walking and cycling and are dotted with a number of attractive villages and towns. L'Arbresle is the largest of these and has developed around a castle. Its centre is dominated by the donjon and its church both of which rise up above the surrounding buildings. Montrottier was built in a circular medieval style and has ancient houses built on its ramparts.

Yzeron occupies an attractive position at the crossroads of the valleys of Yzeron and Garon giving it great views along the valleys.  Riverie once had an important strategic position on the route between Forez and the south of Lyon. Its towers and castle remain of the fortifications set up to protect its privileged position.

Map of Rhone and places nearby