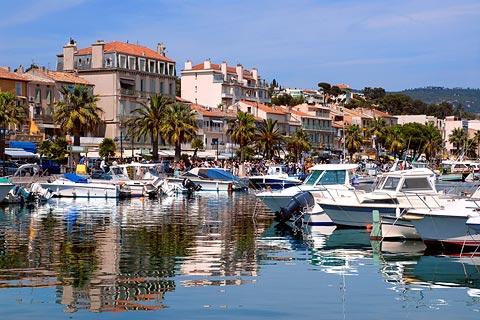 This popular region of southern Provence includes beautiful coastline, famous resorts such as Saint-Tropez, and many other interesting coastal towns and villages

The Var department of France is the central-southern region of Provence, situated along the French riviera between Bandol and Saint-Raphael.

Although the coast attracts the most visitors don't overlook the chance to explore the lovely countryside and scenery, the mountains and forests, just a short distance away!

The principal regions within Var include:

We explore each of these regions in more detail below...

On the coast in the western Var and close to the popular coastal resorts of Sanary-sur-Mer and Saint-Cyr-sur-Mer, we recommend a visit to the vineyards and wines around Bandol.

Close to Bandol the villages of and La Cadiere-sur-Azur and Le Castellet were both very scenic - and less crowded than we expected when we visited!

Among the other highlights along and near the coast in the western Var we must mention the Iles d'Hyeres. These islands just a short distance off the coast and including the Ile de Porquerolles are a major (and very beautiful) coastal attraction forming the Port Cros National Park.

Near the coast in the centre of the department we strongly recommend you take a trip to visit the scenic village of Bormes-les-Mimosas, just a short distance inland. West of here the Domaine du Rayol with its gardens and coastal scenery is very lovely, and not far from the resort of Cavalaire-sur-Mer.

Continuing towards the east of the Var department the picturesque and lively town of Saint-Tropez will be a highlight of your visit to the coast here and a town that will exceed your expectations.

The region around Saint-Tropez also has a great deal of interest sights. Among others be sure to visit sunny Sainte-Maxime and also Port Grimaud (with the older town of Grimaud also close by and very pleasant to explore).

Beautiful medieval villages such as Gassin, Ramatuelle and La Croix-Valmer can be found just a few kilometres inland from Saint-Tropez and are the perfect contrast to the riviera resorts.

We also highly recommend the resort of Saint-Raphael with its inviting sea-front, ideally combined with a visit to see the historic centre of nearby Frejus. A little way inland from Les Issambres a trip to explore the village of Roquebrune-sur-Argens is also very pleasant.

Leaving the Var department towards the east and the Alpes-Maritimes department, the coast road south of the Massif d'Esterel is one of our favourite coast roads in France.

Heading north in the Var the attractive landscape is interspersed with numerous small towns and villages, including several of the well known 'perched villages' of Provence.

This is a good region to discover 'traditional' Provencal towns, less impacted by visitors than the coastal resorts to the south.

Some of the typical towns we suggest you visit here include Les-Arcs, Lorgues and Flayosc - all these are close to the bustling town of Draguignan. See also the roman style Thoronet Abbey, south-west of Draguignan and a listed French national Monument, and Villecroze, best known for its troglodyte caves.

Further east, perhaps stopping to explore Bagnols-en-Foret en route, you can visit the classified 'most beautiful village of France' at Seillans and some of the other perched villages in the attractive Pays de Fayence region - these include Callian, Fayence, Mons, Montauroux, St-Paul-en-Forêt, Tourrettes, St-Paul-en-Foret and Tanneron and exploring them makes for a pleasant day out, with each having its own unique character.

Note: although we have mentioned a few villages, you will find many others across the northern Var that are very picturesque and a pleasure to visit just by exploring!

Haut Var and the Massif de la Beaume - the north

In the north of the department you have left the crowds from the coast behind and are in the Haut Var region. You are also approaching the deep and impressive Gorges du Verdon (also known as the Grand Canyon of France) where the landscape becomes more remote and wild.

Among the towns to enjoy exploring here are Aups, Salernes, and Entrecasteaux, the classified most beautiful village of Tourtour, and the medieval village of Chateaudouble, with its dramatic setting in the cliffs.

At one end of the Gorges du Verdon the very extensive Lake Sainte-Croix has a developed tourist industry and is popular with visitors exploring the gorges, while to the east of the gorges the isolated village of Bargeme is classified as a 'most beautiful village in France' and is also the highest village in the Var. The village at Aiguines is well situated between the lake and the gorges.

Continuing towards the north-west of the Var department the Massif de la Beaume is an extensive scenic area centred around the cathedral town of Saint-Maximin-la-Sainte-Baume, with the town of Barjols to the north of here also having a great deal of interest to discover.

The village of Vinon-sur-Verdon is rather remote in the north-west corner of the Var but is very pleasant to explore if you visit!

Map of Var and places nearby

See an index of Var communes