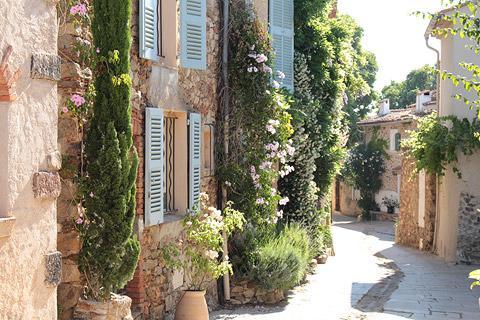 Grimaud is a village in the Var department of Provence, just a few kilometres inland from Saint-Tropez.

Grimaud has a history dating back to the Gallo-Roman age and because of its strategic position the castle of Grimaud dominated the whole area until the 17th century. Indeed the Gulf of Saint-Tropez was called the Gulf of Grimaud until the end of the 19th century. Hard to believe really as you wander around the sleepy village that is Grimaud today.

France This Way comment: Grimaud is very lovely Provencal perched village, with a great deal of character and one of our favourite villages in this region: wandering through the village is a treat. 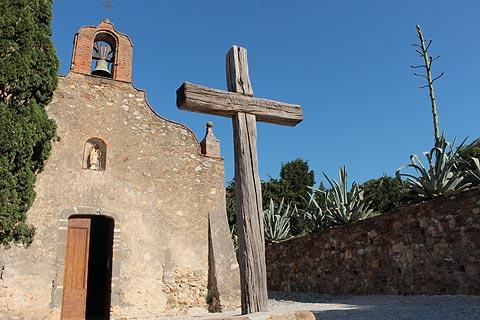 There are various places to park around Grimaud, some free and some paid. The most convenient for visitors is the car park on the main road through the village, because it is next to Grimaud tourist office, but this is also one of the most expensive places to park. Wherever you park you should start a visit at the tourist office because they have a very useful map of the village and its highlights.

There is a lift next to the tourist office that takes you up to the old village. The historic centre of Grimaud is quite extensive and all worth exploring: the winding lanes of the village are edged with vibrant bougainvillea and oleanders and the houses are a lovely warm-coloured stone with the traditional terracotta tiled roves of the Provence region.

You get out of the lift in Place Neuve. This is quite a recent addition to the village, built in 1886 around a fountain that was constructed to provide water to the town from the valley below: until this time there was no reliable source of water for Grimaud. You can still see the fountain in the square.

There are two older squares just behind here, the Place Vieille where the villagers play petanque and the Place du Cros which is actually the top of a water cistern used for collecting water from the rooftops of the surrounding houses. This is also the part of the town where you will find most restaurants.

Beyond Place Vieille you can see the main church for the village, the Church of Saint-Michel. This pretty roman style church was built at the end of the 12th century, and the belltower added in the 16th century. Inside you can see traces of medieval frescoes. Behind the church you can continue as far as the small Chapel Saint-Roch, built in the 17th century, or even further to the windmill and the cemetery. The Saint-Roch Windmill was built in the 17th century and restored to working order in 1990.

The oldest part of Grimaud is in the narrow streets behind the church and Place du Cros, for example in the small square called La Placette and along the Rue des Templiers, once the high street in the village. Along Rue des Templiers there are arcades at ground level and you can also see the 16th century town hall for Grimaud.

You will enjoy exploring the village streets to the west of here, and you should continue until you reach another attractive small chapel, called the Chapel des Penitents and built at the entry to the village in the late 15th century.

There is also a small local Museum of Arts and Traditions in Grimaud which exhibits a large number of items and tools from everyday life in the region, from the past few hundred years. You will also notice several examples of modern art near the church and the chapel of the penitents.

After exploring the village you will want to climb up the hill to reach the castle that dominates Grimaud. The chateau at Grimaud dates back to the 11th century, although the surrounding defensive walls date from the 13th century and several of the buildings were added later.

The period after the 11th century was the height of the prosperity for Grimaud, until they were forced by war and the plague to live behind these fortified walls from the end of the 14th century. The fortified small village grew until the 17th century before eventually being abandoned, then taken down after the revolution.

You can still see and explore the evocative ruins of the castle above the village. You also have lovely views across the countryside and Grimaud village from here, as well as a view to the windmill and a view as far as the Mediterranean. 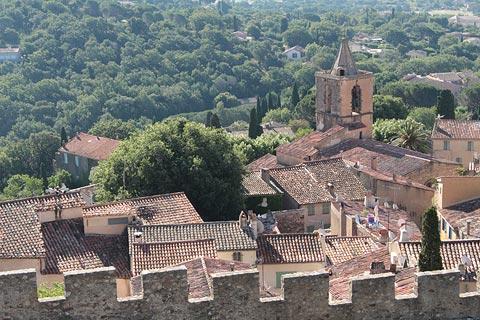 Of course, you will also want to visit the resort at Saint-Tropez while you are here, and other villages that you will enjoy exploring nearby include Ramatuelle and Gassin.

Map of Grimaud and places nearby

Visit near Grimaud with France This Way reviews

Grimaud is classified as a recommended detour town (plus beau detour)

Plan your visit to Grimaud, Var

The French version of this page is at Grimaud (Francais)