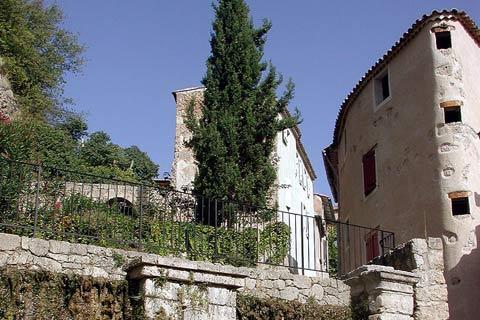 Barjols is a small town in the Var department of Provence, on a gently sloping hillside in the quiet countryside east of Aix-en-Provence and west of Draguignan.

The most unusual characteristic of Barjols is the number of fountains, waterfalls and washhouses that you will discover as you explore, several of them including decorative stonework such as the Fontaine du Boeuf, the Fontaine du Monument and the Chutes du Réal.

In total there are more than 40 of these fountains and washhouses. The most unusual are perhaps the mushroom shaped Fontaine du Champignon and Fontaine Raynouard while the award for 'least attractive name' must surely go to the Fontaine des Limaces (slug fountain)!

It is the presence of these numerous natural water sources that enabled Barjols to prosper as a centre for leather tanning over the course of several centuries. By the middle of the 19th century the town was one of the most important centres for leather production in France, a trade that ended only in the 1970's with the arrival of cheaper leather from north Africa.

Many of the original tanneries are now used as art galleries and artist workshops, several of them open as art exhibition centres. Many of these contain painting and sculptures of a very high standard so allow time to explore - start on the Rue des Tanneurs in the centre of historic Barjols.

Barjols tourist office can give you details of a walking route through the town that passes many of the most interesting of these fountains, and is the most pleasant way to explore Barjols.

The most important religious monument in Barjols is the Collegiale Church of Notre-Dame de l'Assomption. This is an ancient church dating from the 11th century, and although substantially modified during reconstruction work over the following five centuries the church retains interesting original features. The decorative doorway dates from the original church, while most of the structure is in the gothic style and dates from the 16th century.

Inside the church you can see some 16th century carved stalls and a medieval stone baptism font as well as a large number of stained glass windows.

The Maison de l'eau celebrates the ever present water in the town (as well as the fountains there are three small rivers in Barjols). Established in a 17th century hospice, the centerpiece of the maison de l'eau are the aquariums showing the freshwater fish that are found in the region, and there are also displays explaining water management in the Var.

An unusual festival called the 'fete des tripettes' is held in Barjols in the middle of January each year, during which a procession is held through the town and a service held in the church paying tribute to both Saint-Marcel and beef tripe - an unusual combination of religious occasion, eating beef and dancing!

This festival dates from an event in 1350 when pilgrims bringing the relics of Saint Marcel here encountered villagers washing tripe (as part of preparations for a more ancient festival) and joined them in the church for a special service.

After exploring the village we suggest you follow the path along the Carmes Valley above Barjols, a pleasant walk that passes several small waterfalls and caves and has picturesque views back across the village.

The weekly markets in Barjols are held on Tuesday and Saturday.

Close by you can visit the tranquil small villages at Varages and Tavernes, and the medieval centre of Cotignac. Other small traditional provencal towns we suggest that you visit to the east of Barjols include Aups and Salernes, while the important town of Aix-en-Provence is an unmissable excursion to the west of Barjols.

Barjols is often explored as an excursion from the Gorges du Verdon, to the north-west. It is also south of the popular area around Valensole, often visited for the extensive lavender fields of the region.

Note: photo of Barjols is copyright.

Map of Barjols and places nearby

Visit near Barjols with France This Way reviews

Plan your visit to Barjols, Var

The French version of this page is at Barjols (Francais)