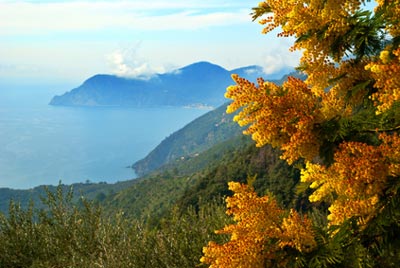 The 'Route du Mimosa' is a scenic route through south-east Provence, largely near the coast of the French Riviera, that is designed to show the countryside and towns of the region at their best during the early spring when the mimosas are in flower

In places it is exceptionally beautiful and there is a great deal to discover in the region - especially the colours, with the contrast between the yellow of the mimosas and the blue of the sea - and also the fragrant smell of the flowers.

The weather is usually sunny and bright even in the early Spring (although you might not be tempted to go in the sea...)

The principal towns along the route have attractions specific to the route, typically gardens open to the public, festivals and other events.

Any of the appropriate tourist offices will be able to give you times and dates of these events and other highlights when you visit - these will vary according to the dates of your visit.

The route du Mimosa essentially passes through the following towns and villages along its 130 kilometres (distances to each centre are shown to help with your travel planning). As you can see, the last four towns are all quite close together and easy to visit from one place:

The beautiful village of Bormes-les-Mimosas is the start point for the route, and a highly recommended place to pass a day or two before you start the route.

One of our favourite towns on this part of the coast, Saint-Raphael features mimosa events and festivals

Tanneron hands itself over completely to mimosas during much of February, and a substantial area around Tanneron is 'forests' of mimosas!

Pégomas is a pretty small town with a popular Mimosa Garden.

Grasse is an interesting historic town best known for its perfume, in part made with mimosa flowers

Each stop has its own particular highlights - see the reviews of the individual towns for more details.

Note: while you are made very welcome by the local tourist offices along the Route du Mimosa please remember that they want the beauty to remain for the next visitor so picking the mimosas is strictly forbidden. 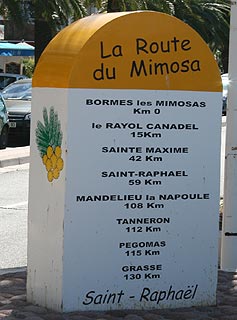 The Mimosa route is at its best from late January to early March, with mid-February the most popular time with visitors and the time when the towns have special events related to the route.

If you are arriving by air the airports at Nice and Toulon are the closest to the route (Nice for Grasse and the eastern part of the route, Toulon for Bormes-les-Mimosas and the west).

A hire car will be indispensable (unless you are a keen cyclist) if you are to make the most of your visit, public transport being unavailable on much of the route (see France car rentals).

Although the route is 'only' 130 kilometres long, so perhaps in principle the complete round trip (from Bormes-les-Mimosas to Grasse and back) could be made in one day, we would highly recommend you allow at least three or four days (or ideally a week).

This will allow you the time to stop and explore properly, or take 'side excursions' to some of the other picturesque towns and villages nearby such as Ramatuelle and Gassin, Saint-Tropez and Frejus...and many others.