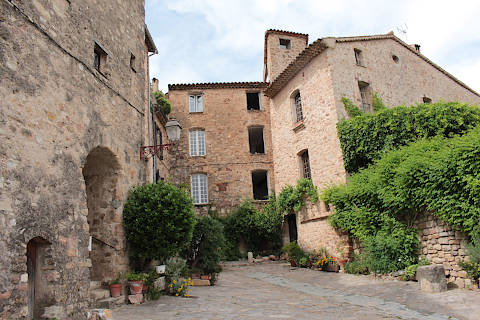 Les-Arcs-sur-Argens is found in the Cotes de Provence wine region of Provence, a little to the west of the French Riviera resorts of Frejus and Saint-Raphael. In a site that has been inhabited for 2500 years, the town is now best known for its role as a wine producing town but everyone will enjoy a visit, wine-enthusiast or otherwise.

Note: the village is often referred to as Les-Arcs - which can cause confusion with the French 'Les-Arcs' ski region - see Les-Arcs if you want to ski instead of exploring a historical village!

France This Way comment: we discovered Les Arcs-sur-Argens while travelling from the Gorges du Verdon to the coast and were very glad we did! The town itself is pleasant if unremarkable but the historic area known as Parage is exceptional with numerous lovely old houses and a tangle of cobbled streets. 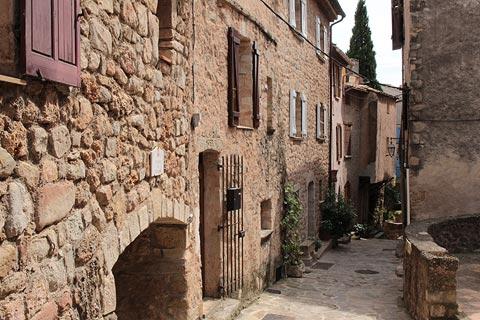 The old town of Les Arcs-sur-Argens is known as the Parage, and is a small region of ancient and pretty streets encircled by medieval fortifications to explore and enjoy. There are numerous picturesque old stone houses, arched gateways and other architectural features as well as plants to see along the streets and on the buildings as you explore the cobbled streets of the old village.

This historic part of Les-Arcs-sur-Argens was neglected for a very long time but a large process of renovation began in the 1960's to restore the Parage district - and it is now as if the original village is here unchanged since several centuries!

One particular site of note as you wander the medieval streets is the 19 metre tall castle keep, the most important part of the ruins of the castle that once stood here and in Place du Château, in the centre of Parage. The tower was built before 1250, and although in the 16th century there were several other castle buildings still standing these have unfortunately disappeared over the centuries.

Other important monuments in Les Arcs-sur-Argens include the clocktower built in the 17th century in Place de l'Horloge and featuring one of the most ornate campaniles I remember seeing, an ironwork fountain in Place du Père Clinchard and the 12th century roman style Chapel of Saint-Pierre (exhibitions are now often held in the chapel during the summer months).

After exploring the Parage area you can descend to the newer town. The tourist office of Les Arcs-sur-Argens is in the main square, Place Général-de-Gaulle, near the Town Hall and the music kiosk. They can give you information about a route that explores this part of the town that includes several fountains and washhouses as well as the Church of Saint-John the Baptist (the large church you can see from the raised Parage district).

An important site nearby is the Chapel of Sainte-Roseline, a few kilometres outside Les-Arcs-sur-Argens. With its origins in the 11th century the chapel was part of an Abbey complex called the Monastery of la Celle-Roubaud - converted in the 18th century and now known as the Chateau Sainte-Roseline (a wine producing chateau). The abbey-castle is now in private ownership and not open to the public, but the chapel can be visited.

The chapel contains a shrine to Sainte Roseline, and some relics of the saint, and a baroque style altarpiece. Perhaps more surprisingly the 16th century decorations of the church have now been added to, and include a mosaic by Marc Chagall (the celebrated russian artist who lived in the area) and some Giacometti statues - an idea instigated by Marguerite Maeght, of the family who created the Fondation Maeght art gallery at Saint-Paul-de-Vence. 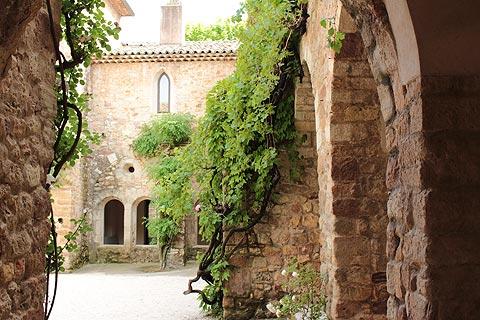 Many of the activities around Les Arcs-sur-Argens are based in the Massif des Maures, a forest covering 1500 hectares that contains several prehistoric menhirs and dolmen and numerous marked trails. Canoeing on the Argens river is another possibility for visitors.

Although Les-Arcs-sur-Argens is in one of the less visited parts of Provence, there are various other small towns and villages that are pleasant to explore nearby such as Flayosc and Lorgues, and the Riviera coast with resorts such as Sainte-Maxime and Saint-Raphael is only about 25 kilometres east of the village.

Map of Les-Arcs-sur-Argens and places nearby

Visit near Les-Arcs-sur-Argens with France This Way reviews

Plan your visit to Les-Arcs-sur-Argens, Var

Regular market(s) are held in Les-Arcs-sur-Argens each Thursday. (Markets are held in the morning unless stated.)