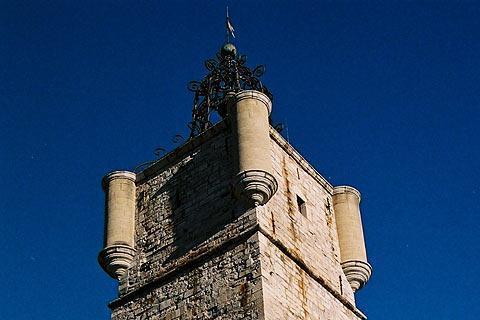 Draguignan is a substantial town to the east of the Var department (Provence region) of France.

While Draguignan has not historically been an important tourist destination, in recent years the town centre has been improved and the town has been growing in popularity as a destination with visitors to this part of Provence. It also has the largest shopping centre in the region.

A significant part of the historical old town of Draguignan was removed to make way for the boulevards, the broad tree-lines avenues that were created in the 19th century and which now surround the old town.

These bustling boulevards provide a contrast to the old town, which has lots of narrow streets opening on to open squares with traditional fountains, and some houses with interesting architectural details. Some of the best preserved medieval houses can be seen in the Rue de la Juiverie.

One highlight of particular note is the 17th century clocktower, a square tower with a campanile that stands on a raised rocky area above the town. There is also a nice public garden in Draguignan, and a memorial and war cemetery for the US soldiers killed during the Second World War landings on the Provence coast (1944).

There are also a couple of museums of interest in Draguignan, the most important being the Museum of Provencal Traditions, that focusses on the history of agriculture and crafts in the Var. The other is the Municipal Museum that contains many artefacts from the history of the town, and is housed in the 18th century Bishops Palace.

Ideally you will arrange your visit for Wednesday or Saturday, the weekly market days in Draguignan.

Just outside Draguignan is a large prehistoric dolmen called the Fairy Stone (Pierre des fées), one of the most impressive I recall seeing, with an enormous slab of stone supported about two metres off the ground by three massive rocks.

The relative isolation of Draguignan from the more visited highlights of the Var department is part of the reason for its lack of visitors, but there are several other small towns and vilages nearby that also retain the character of 'old Provence' such as Flayosc to the west and Les-Arcs-sur-Argens to the south.

The town is also about half way between the lively resorts of the Cote d'Azur such as Saint-Raphael and Cannes to the east, and the glorious scenery of the Gorges du Verdon to the north.

Map of Draguignan and places nearby

Visit near Draguignan with France This Way reviews

Plan your visit to Draguignan, Var

Regular market(s) are held in Draguignan each Wednesday & Saturday. (Markets are held in the morning unless stated.)

The French version of this page is at Draguignan (Francais)