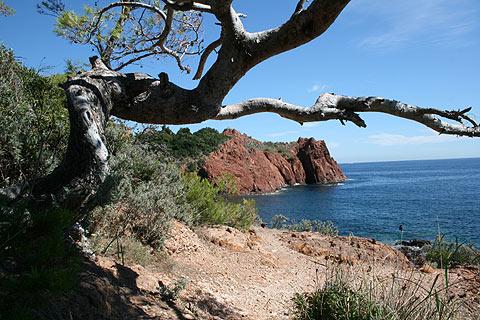 Although it is quite low altitude for a mountain region, the red rock scenery and the far reaching views make it an interesting region to explore. There are two 'parts' to the Massif de l'Esterel: 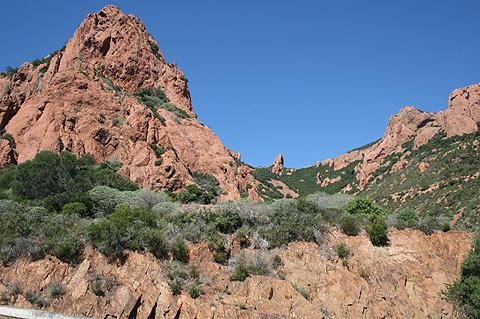 There are several points where you can access the massif and reach the highest peaks - sometimes a small walk is required to reach the highest points - and each has its own attractions, and most have impressive views stretching far out along the coast and across the mediterranean.

There is little in the way of villages to discover within the Massif d'Esterel itself, and a great deal of the forests that once covered the area have been destroyed by fire (there is still an area of forest towards the north) but what remains is still very impressive.

There are several marked trails for hikers and off road cycling in the Massif d'Esterel and these are the best way to explore the region. Among the most popular are those to the Cap du Dramont, the peak of Mont Vinaigre (the highest point in the Massif), the walk to the viewpoint at Cap Roux (our favourite of the walks we have done here), and the Blavet Gorges at Bagnols-en-Foret to the north.

The coast road which follows the southern border of the Massif de l'Esterel is one of the most scenic coast roads in France. In many places the cliffs of the massif reach the sea, forming small coves surrounded by the red rocks, with more jagged rocks emerging dramatically from the sea.

Along the coast road there are a few small towns and resorts such as Agay, and beaches such as the one at Dramont beach* but it is the scenery that is the big attraction. 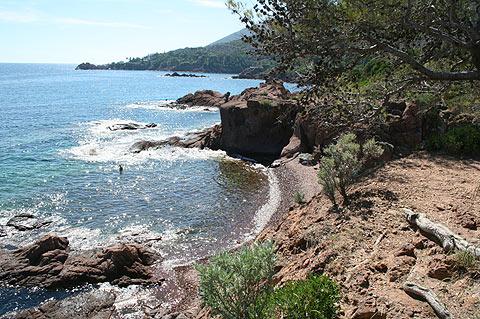 * Dramont beach is also known for being one of the World War II landing beaches used by the invading allied forces that took place on the Mediterranean coast on the 15 August 1944.

After walking in the Provencal sunshine you will probably want to enjoy a drink in one of the costal resorts in the region! To the south of the Massif d'Esterel we like the resort of Saint-Raphael while to the east you can visit Theoule-sur-Mer, or carry on a little further to Cannes.

Map of Massif de l'Esterel and places nearby

Visit near Massif de l'Esterel with France This Way reviews