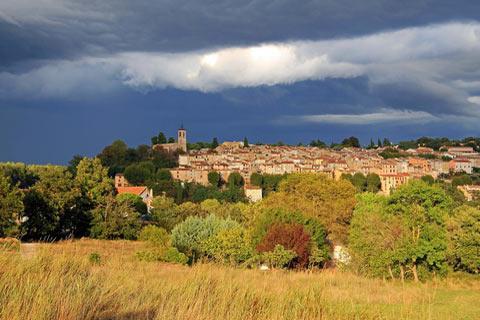 Bagnols-en-Foret is a village to the north of Saint-Raphael in the Var department of Provence, France and on the eastern slopes of the Esterel massif. It is this enviable position that provides much of the charm of the village, with both the coast and a great deal of beautiful scenery close by.

The village is spread out along a low hill, and while it has little in the way of 'important monuments' it is a very pleasant place to explore with picturesque houses and babbling fountains, and has nice views across the countryside and a few restaurants where you can relax in the shade.

The church of Saint-Antonin at the northern end of the village has a tall clocktower with an intricate campanile next to a typical romanesque village church - except the church actually dates from the early 18th century and the entrance in roman style was added in the 19th century. Another church in a similar style can be seen just north of the centre of Bagnols-en-Foret.

Continue from here along the Rue de l'Eglise and into the narrow streets in the centre of the village, then passing via the Place du Rond and into Rue de la Pompe. At the end of this street you can turn right and follow Grande Rue, the principal street through the village, back to your starting point.

Notable sights on Grande Rue include the Fontaine de la Siagnole with its statue of a cherub and the Town Hall in the Place de la Mairie, and the Bagnols-en-Foret tourist office is also here.

There is a small museum above the tourist office explaining the history of agriculture, particularly olives, and with some items discovered during archaeological excavations in the region.

Above the village you can also visit the ruins of an old fort, and part of an ancient industry here that produced mill wheels for use in flour mills, an industry dating back as far as the iron age. 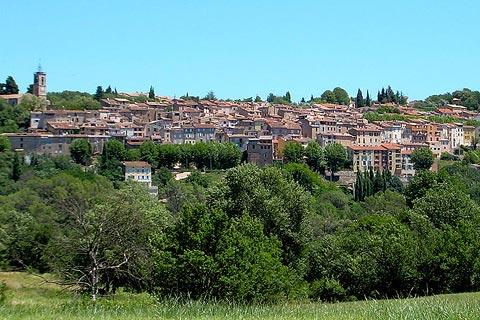 The location of Bagnols-en-Foret is ideal for those wanting to spend some time on the coast (it is about 15 kilometres inland from the Cote d'Azur), but also having a chance to explore the many villages and scenic countryside of the region.

There are several other interesting small villages nearby in the Pays de Fayence region such as Seillans (classified as one of the 'most beautiful villages in France'), Fayence and Tourrettes among others a little way north of here.

Much of the immediate countryside around Bagnols-en-Foret is wooded (hence the name of the town), and there are many scenic highlights close by such as the Gorges of the Blavet River (very popular with hikers and rock climbers) and the Gourbachin waterfall, as well as the Esterel massif itself to explore.

Map of Bagnols-en-Foret and places nearby

Visit near Bagnols-en-Foret with France This Way reviews

Plan your visit to Bagnols-en-Foret, Var