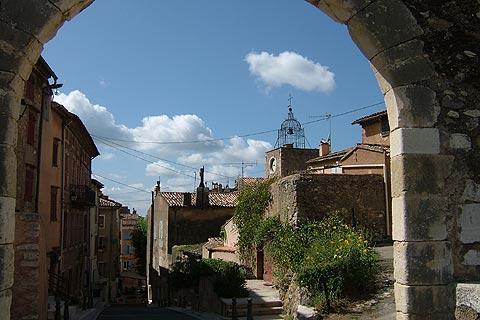 The town of Aups is towards the north of the Var department of Provence, in the heart of the Upper Var and towards the northern edge of the Cotes de Provence wine region. It is a short distance south of the popular and scenic Gorges du Verdon.

France This Way comment: perhaps Aups lacks the charm of some of the more popular towns in Provence, but there are a good number of sites of interest hidden in the streets of the town and an interesting old town to explore so a visit is recommended when you are nearby.

On the southern edge of the town centre you can find Aups tourist office, next to the collegiale church of Saint-Pancrace and inside the Hospital of Saint-Jacques. The tourist office has a map that suggests a 'Historic Trail' through the town and we highly recommend you follow it, or you will very likely miss a lot of the places of interest: some are rather hidden in the back streets. 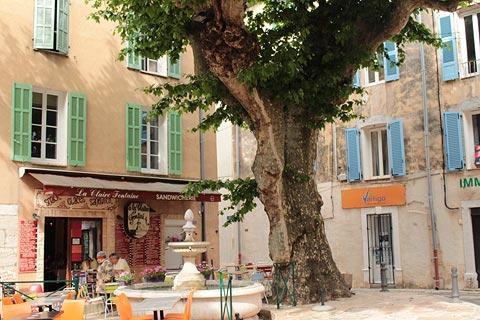 The hospital of Saint-Jacques was a hospital from 1665, then became a retirement home in the 20th century and in 1995 became the tourist office for Aups.The Collegiale Saint-Pancrace was built at the end of the 15th century in the gothic provencal style and has a renaissance style facade. There are several interesting objects to be seen in the church such as a 16th century tryptych and several altarpieces, although none pre-date the wars of religion (1562-1598), during which the furnishings and wooden door surround were destroyed.

From here you can continue along Rue Gabriel Péri and into the old town. You will enjoy simply wandering the medieval streets in the heart of Aups, which contain various small chapels, ancient houses, fountains and lavoirs, and buildings of interest as well as some of the original gateways and village fortifications.

Continue along Rue du Marché to Place du Marché to see a clocktower with a campanile (of course no Provençal village would be complete without a campanile!) that was originally built in the 16th century as a lookout tower. The Porte des Aires is a gate through the medieval ramparts of the town, which date in part from the 12th century and partly from the 16th century. The gate takes its name from the 'aires' (areas) that it overlloks where wheat threshing once took place. There is also a small tower with a balcony here although its origins are unknown.

Then continue to the Chapel Notre Dame de la Délivrance, a small chapel built in the 19th century on the site of a earlier castle. The chapel was paid for by contributions from the villagers to thank the Virgin for saving the village during battles betwen Napoleon III troops and republicans. You can see some remains of the ramparts that protected medieval Aups next to the chapel.

Walk a short distance west to Place Mal Joffre to see the washhouse and the saracen tower, then west along Rue de l'Horloge. Take a look at the small statue of the virgin in the facade of the Church Notre Dame de l'Assomption: this status commemorates a day in 1574 when the Huguenots attacked Aups, set fire to the church and murdered 18 young people in the village square.

At the northern end of Place Mal Joffre there are also some interesting local and other contemporary paintings in the Simon Segal Museum - even if you don't plan to go in you should find it to admire the pretty old convent building (cistercian, dating from the 12th century). There is a small Museum of the Resistance behind the Simon Segal Museum. 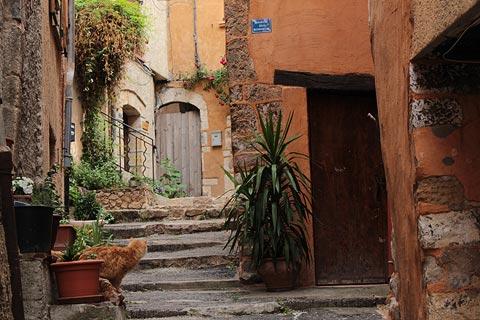 Whatever time of year you visit Provence, try and visit Aups on one of its market days: weekly markets, held on wednesday and saturday mornings and the winter truffle markets held in the town on thursdays from November to February.

To the north of Aups you can explore the beautiful scenery of the Verdon Regional Natural Park, which includes the Gorges du Verdon and the Lake de Sainte-Croix.

To the south of the village there are several other small traditional Provencal towns and villages that are interesting to visit such as Entrecasteaux and Tourtour.

Map of Aups and places nearby

Visit near Aups with France This Way reviews

Plan your visit to Aups, Var

Regular market(s) are held in Aups each Wednesday & Saturday. (Markets are held in the morning unless stated.)

The French version of this page is at Aups (Francais)