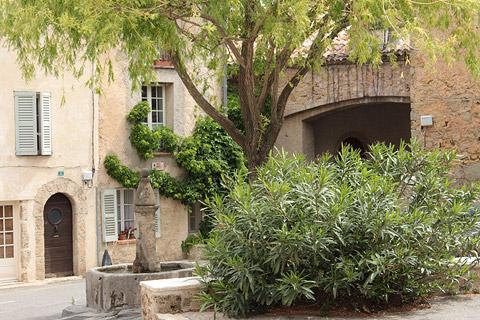 Tourtour is about 50 kilometres inland from the coast in Provence, west of Frejus and north-west from Draguignan. The town is also at the north of the Cotes de Provence region, a wine growing region that stretches south-east to the coast from Tourtour.

France This Way comment: Tourtour was a lovely surprise when we visited, with a very picturesque ancient centre and a beautiful main square surrounded by pretty houses and with lots of cafes - the perfect combination!

The old centre of Tourtour dates from the middle ages, with two parts to the old town: the earlier (to the north-west) dating from the 11th century, and the latter (to the south-east, around the main square) from the 14th century. The two parts are different in character, with the streets in the older quarter narrower and steeper and the houses smaller. 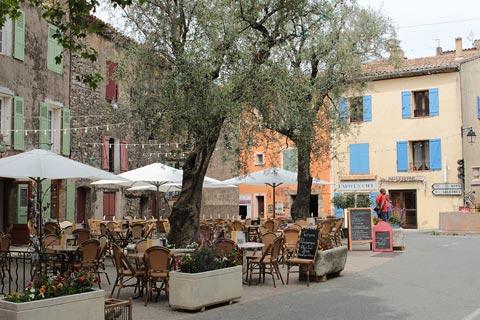 At the south-east end of Tourtour there is a gateway in the original ramparts, with a bell above the gateway, next to a small square with a lovely old fountain and the 17th century Chapel of the Trinity. Close to here you can see the 17th century communal chateau, painted in pastel and like a manor house with towers at each corner. The chateau is now used as the village town hall, post office and tourist office for Tourtour.

Next to the castle there is a square, Place Annabel et Bernard Buffet, where the market is held and locals play petanque. There are also several artworks around the edges of the castle and the square.

The main square, called Place des Ormeaux, is a charming square surrounded by traditional Provencal houses and filled with trees and cafes. The beautiful old olive trees in the central square were imported from Italy to replace the elms that long stood here but died.

To the west of here the main pleasure comes from simply strolling along the streets enjoying the ambiance, discovering the cobbled streets and vaulted passages and seing the ancient houses and fountains. There are lots of the narrow streets lined with very picturesque Provencal houses to explore that we associate with the region, and a few minor highlights such as the oil mill (still in operation) and the clocktower with its campanile, and the remains of two old castles.

There is a church just outside the historic centre of Tourtour to the east, the Church of Saint-Denis, that is an attractive roman style church with origins in the 11th century. The church is on a small raised hill surrounded by trees and also has exceptional views across the surrounding countryside. Inside the church there are several interesting religious artefacts including 16th century busts of Saint-Stephen and Saint-Nicolas.

If you have timed your visit carefully you can now return to the main square to enjoy a coffee break or lunch in one of the cafes! 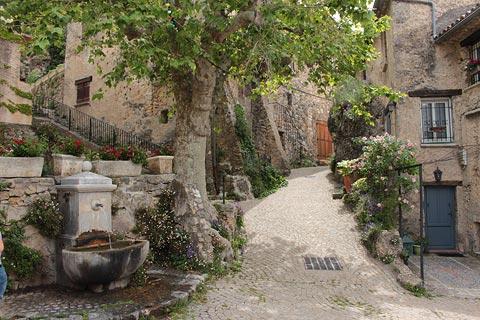 After exploring the centre of Tourtour you should walk a short distance north of the village along the Rue du Lavoir (on the east side of the village) for a lovely view across the fields and the rooftops of the village.

You can see the 12th century Grimaldi tower a little way outside the town (direction Aups) as well as a medieval bridge across the River Florieye below the village.

Tourtour is one of a group of towns each with their own particular charm in this part of Provence known as the Upper Var - see also Les Arcs, Aups, Lorgues and Flayosc as well as being listed among the most beautiful villages in France. The village at Villecroze, a few kilometres east of Tourtour, has a charming historic centre and a park with troglodyte dwellings.

The position of Tourtour between the coast and the Gorges du Verdon mean that it well placed to explore both the Cote d'Azur and the Provence countryside.

Map of Tourtour and places nearby

Visit near Tourtour with France This Way reviews

Plan your visit to Tourtour, Var

The French version of this page is at Tourtour (Francais)