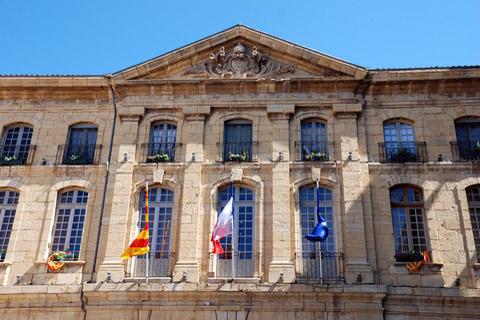 Saint-Maximin-la-Sainte-Baume is situated towards the west of the Var department of Provence and about 34 kilometres east of Aix-en-Provence. There are several notable sights to visit here that bear witness to the colourful history of the town over the last 800 years.

A little history of the town is useful if you are to understand the importance of Mary Magdalene to Saint-Maximin-la-Sainte-Baume. Entering France by boat (at Saintes-Maries-de-le-Mer) after the crucifixion. Mary Magadelene subsequently spent many years living in a cave near here (the Grotte de la Sainte Baume). In the 13th century her tomb was discovered here, and many pilgrims were attracted to the region that became Saint-Maximin.

A lively town, St Maximin falls in two distinct areas, both of which are interesting to explore: there is an active shopping centre based around Rue General de Gaulle, and the old town centred around the 'Jewish quarter' containing traditional medieval arcaded buildings.

It is true that the town is quite remote from most of the popular tourist destinations in the region but if you are, for example, following the motorway towards Nice and Cannes, Saint-Maximin-la-Sainte-Baume is an interesting place to stop for a while. 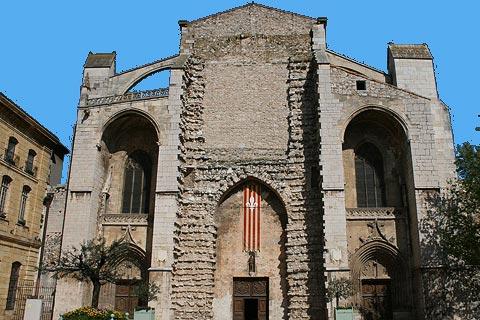 Saint-Maximin-la-Sainte-Baume is best known for the 13th century Basilica of Sainte-Marie-Madeleine, the largest gothic style monument in Provence that dominates the skyline of the town. The cathedral was built on the site of a much older crypt in order to contain the relics (her skull) of Mary Magdalene, as well as other important historical objects.

Although work on the cathedral continued for over three centuries you will notice that the facade and the belltower were never built. Inside the cathedral you can see the crypt itself, and the sarcophagus, and several other important works of art, as well as numerous decorative features and an important 18th century organ.

Another highlight in Saint-Maximin-la-Sainte-Baume is the Royal Convent of the Dominicans, constructed to house the monks who established a community here from the end of the 12th century. The convent has a lovely gothic style cloisters and garden, and is surrounded by other monastic buildings (one wing was demolished after the revolution and rebuilt in the 19th century).

The convent is situated next to the cathedral and also holds the Saint-Maximin-la-Sainte-Baume tourist office.

More classical in design, the the substantial Town Hall dates from 1750. It was originally built in order to host the most important pilgrims that visited the relics of Saint Mary-Magdalene in the basilica.

France This Way comment: the town centre of Saint-Maximin-la-Sainte-Baume is quite small and the important monuments are close together so a visit need not take very long, although you are likely to want to sit in the shade and enjoy a coffee while you are here! If possible visit on a Wednesday morning, market day, when the town is more lively.

Activities in the region

Outdoor leisure activities near Saint-Maximin focus on the extensive Massif de la Sainte-Baume and the views from Mont Aurelien, an extensive 'southern outpost' of the Alps that includes cliffs, ancient forest, caves and lovely scenery such as the Gorges du Caramy and the Cascade du Tombereau.

If you are an enthusiast of small Provencal villages there are several of interest nearby of which Rougiers, Pourcieux and Nans-les-Pins are among our favourites.

Map of Saint-Maximin-la-Sainte-Baume and places nearby

Plan your visit to Saint-Maximin-la-Sainte-Baume, Var

Regular market(s) are held in Saint-Maximin-la-Sainte-Baume each Wednesday. (Markets are held in the morning unless stated.)