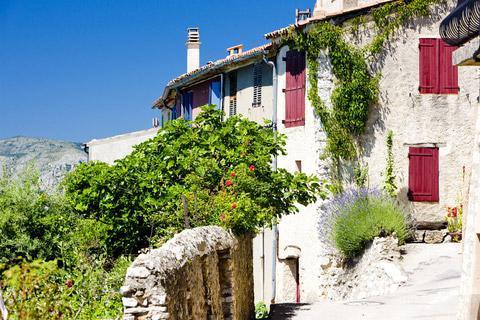 Aiguines is a small village on the northern border of the Var department, near the Lac de Sainte-Croix (to the west) and the Gorges du Verdon (to the east) and at the foot of the mountain called Grand Margès. The village falls within the Verdon Natural Regional Park and is well placed to discover this scenic region of Provence.

France This Way comment: Aiguines is very pleasant but small and with not a great deal to see. Overall, although it doesn't take long to explore and is perhaps not the most beautiful of the villages in Provence, a detour to stroll through Aiguines and to admire the views across the lake is recommended when you visit this region. 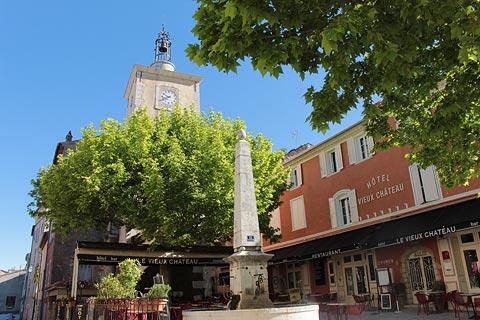 Aiguines is a typical Provençal village, centred around the square in the centre of the village (Place de la Fontaine) where you can see a bell-tower with a traditional ironwork campanile, faded pastel painted houses, a fountain in the central square in the village and a sundial. The fountain was built in the 18th century at the behest of the owner of the castle, with the water being shared between the village and the castle.

The principal pleasure comes from strolling through the centre and along the narrow lanes in the heart of Aiguines. Another notable feature is the views from in and around the village that extend far across the Lac de Sainte-Croix.

One of the most interesting monuments in Aiguines is the 17th century castle. Although the castle itself is not open to the public you can still get good views of the castle from outside and admire the unusual coloured tiles that decorate the round castle towers.

Close to the castle you can see the Church of Saint-Jean and Notre-Dame, which is the main church for Aiguines. This church dates from the Middle Ages, when it was built as a small chapel, and was extended to create the current church in the 17th century.

Another interesting religious monument is the Chapel of Saint-Pierre, slightly outside the main village and most visited because of the lovely views across the lake from next to the church. Hard to believe, this small chapel used to be the main church for the village. It was built in the roman style in the 11th century close to the castle that once stood here and has been restored in recent years.

Back in Aiguines and opposite the town hall you should also take a moment to admire the 18th century facade of the "Maison des consuls".

It is interesting to note that Aiguines was originally a centre for the production of boules for petanque, during the time until the early 20th century that these balls were made from wood with hundreds of nails embedded in them rather than the solid metal balls we see today. These were known as 'boules cloutées' from the French word 'clou' (trans: nail).

There is a small museum in the village where you can see examples of these boules called the "Musée de la Tournerie sur Bois" and learn how they were produced (only open in the summer).

Aiguines is also known for its other traditional products such as lavender, honey and truffles. If possible try and visit on a Tuesday morning, day of the weekly market in Aiguines, to try these and other local products. 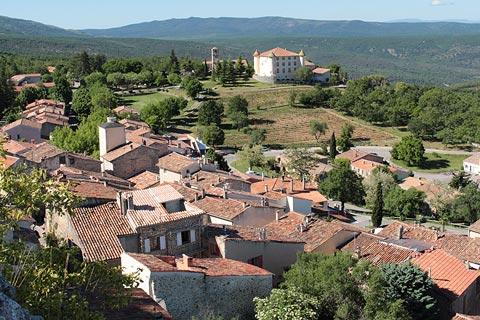 Enthusiastic hikers will also find a great deal to explore, including the chance to walk to the summit of the Grand Margès. The other side of the lake is the Plateau de Valensole, well known for its lavender fields.

Map of Aiguines and places nearby

Visit near Aiguines with France This Way reviews

Plan your visit to Aiguines, Var

The French version of this page is at Aiguines (Francais)