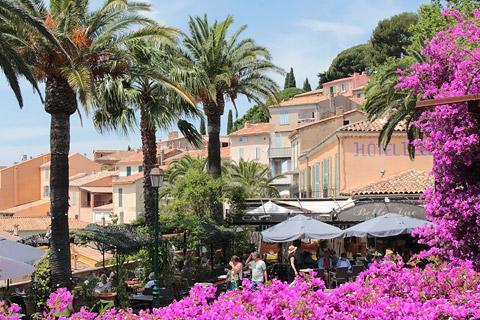 Bormes-les-Mimosas is a few kilometres inland from the Cote d'Azur, about halfway between Toulon and Saint-Tropez. The romantic sounding 'les Mimosas' part of the name was added in 1968 to celebrate the fact that there are so many flowers, trees and bushes in the town - in particular mimosas of course - and to promote tourism.

France This Way comment: the historic village of Bormes-les-Mimosas is certainly one of our favourite villages in Provence, with a myriad of ancient streets overflowing with plants and flowers, parks and gardens, and views to the Mediterranean coast. You must visit if you are nearby!

Note that Bormes-les-Mimosas also has a large, more recent part to the town which is less interesting to visitors: you are heading for the medieval village further up the hill! There are two large car parks with free parking to the east of the town centre near Park Gonzalez (the Parking Saint-Francois) so this is a good place to start a visit.

The historic village is on a steep hill, with a castle at the top and a myriad of narrow streets winding down the hill below and occasionally opening into small open squares, lined with pretty houses, lots of flowers, and boutiques and posh shops. The principal pleasure of a visit comes from simply strolling along the streets admiring the houses and flowers and catching glimpses of the views across the surrounding landscape.

Leave the parking by the road that passes the small Chapel of Saint-Francois-de-Paule. This chapel was built in the 16th century in tribute to Saint Francois-de-Paule, who a century earlier had saved the village from the 'black death' and is in the provencal roman style. Just beyond the chapel in Place Gambetta you can visit Bormes-les-Mimosas tourist office: they can give you a map which is vital when navigating the numerous small alleys in the village centre!

The two most important historic monuments in Bormes-les-Mimosas are up the hill from here. The first you reach is the Church of Saint-Trophyme, built in the 18th century in the roman style so the church gives a good impression of a much older church. Apparently this is the church frequented by French presidents when staying in the region.

The ruins of the 12th century castle (not open to the public) are at the highest point of the village and reached by a pretty plant surrounded path and has lovely views across the Mediterranean to the Iles d'Hyeres.

There is a path that continues further up the hill behind the castle, leading after about 40 minutes to the small 13th century Chapel Notre-Dame de Constance, and more panoramic views. Passing several oratories en route, this walk is a lovely way to enjoy the scenery around the village and recommended.

You can now descend into the main part of the historic village. I am not going to try and explain the best way to explore Bormes-les-Mimosas: everywhere you look there is another narrow street or alley with lots of plants and flowers and you will want to explore many of them! The Rue des Bougainvilliers between the Church of Saint-Trophyme and the Place Yann Piat is a good place to start... 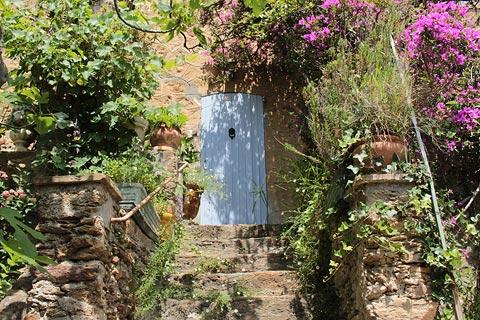 There are at least 12 fountains in the village - see how many you can find - as well as some gardens and parks such as the Jardin Botanique and the Jardin Lou Pitchounet. In the heart of the village there is a broader road called Rue Carnot with taller houses, many painted in provencal pastel colours, and where you can find more shops and restaurants.

The Museum of Art and History in Bormes-les-Mimosas (the west end of Rue Carnot) is also recommended. the building housing the museum is itself very impressive, and the art collection it contains is also very interesting (mostly 19th and 20th century artists working in the region just as 'modern art' started to develop around the beginning of the 20th century).

After you have explored the main part of the historic village you can take a walk through the large parks at the south-east of Bormes-les-Mimosas. There are two parks but they are adjacent, separated by a road.

The first is the Parc Municipal du Cigalou, and then you can continue along the path up the hill through the Parc Gonzalez, a lovely path through well maintained gardens with a wide range of plants, that brings you back to the car parks and a lovely view across the rooftops of the town. 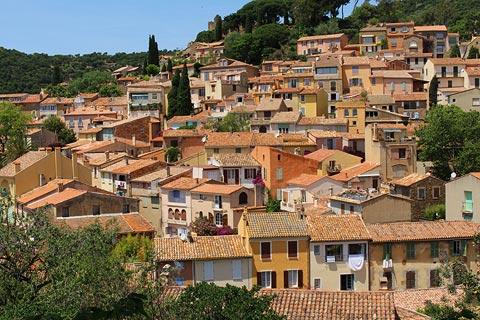 A popular way to enjoy the scenery of the region is to follow the Route-du-Mimosa, a 115 kilometre trip that starts from Bormes-les-Mimosas and follows a picturesque driving route north-east along the coast via Le-Rayol-Canadel, Sainte-Maxime, Saint-Raphael, and on to Tanneron, Pegomas and eventually Grasse. The trip is best made in late January or February to see the mimosas in flower.

A boat trip to explore the Iles d'Hyeres is also recommended.

Map of Bormes-les-Mimosas and places nearby

Visit near Bormes-les-Mimosas with France This Way reviews

Plan your visit to Bormes-les-Mimosas, Var

Regular market(s) are held in Bormes-les-Mimosas each Wednesday & Saturday. (Markets are held in the morning unless stated.)