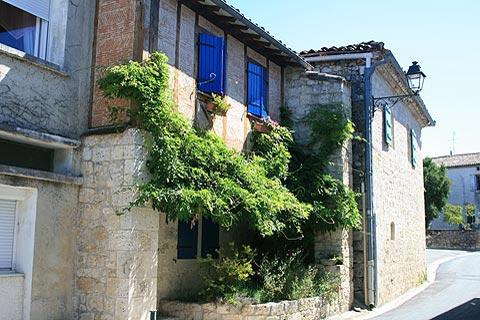 Lot-et-Garonne is perhaps the France that you always hoped existed but could never quite find - medieval villages and sunflower fields, quiet roads and small farms in gently rolling countryside. One of the 'best kept secrets' in France!

The Lot-et-Garonne department is in south-west France to the south of the Dordogne and north of Gascony, where it forms part of the Aquitaine region of France.

France This Way comment: the Lot-et-Garonne is a very good choice for a holiday in France if quiet appreciation of nature and the chance to relax away from crowds is your priority: it is a department for relaxing, for quiet country walks, and is great cycling country. There are more 'sights' (bastide towns, castles etc) towards the north-east, less tourists and quieter roads further south.

The landscape of the north-eastern Lot-et-Garonne department is similar in appearance to the Dordogne region to the north, with a mix of wooded slopes, small scale farming and some forested areas. To the south it becomes more like Gascony, with gently rolling fields and quiet roads passing through lovely countryside.

Everywhere in the department you will find fields of sunflowers, traditional market towns and small picturesque villages, and orchards - typically of plum trees grown for the delicious pruneaux d'Agen, a local speciality.

In the north-east Lot-et-Garonne you can explore villages such as Monflanquin and Villereal: these two villages are quite different in character and both very pleasant to visit. Monflanquin has far reaching views from its hilltop position and is listed as one of the 'most beautiful villages in France' and the 13th century village of Villereal retains many historic buildings and an imposing medieval market hall - the weekly market has been held here every saturday since the 13th century!

You have easy access to the highlights of the southern Dordogne such as Eymet, Monpazier and Issigeac and can also visit Castillonnes, a traditional small French market town, as well as numerous smaller villages and hamlets you will come across as you explore.

The Dropt valley runs along the northern edge of the Lot-et-Garonne department as you head west from Villereal with places to visit along the Dropt Valley including Miramont-de-Guyenne, the castle and small medieval centre of Lauzun, and the impressive medieval frescoes in the church at Allemans-du-Dropt.

There are several particularly notable castles to visit in Lot-et-Garonne quite close together here in the north-east part of the department such as the imposing Chateau de Bonaguil, one of our favourite castles in France, and the impressive castle at Chateau de Biron.

The ancient fort and donjon at Gavaudun in a small village in the picturesque Gavaudun valley has a very imposing donjon - for those who are not scared of heights! -and in the same valley you can visit the small village of Saint-Avit.

A more recent castle can be seen at Duras, where you can also sample the impressive wines produced in the surrounding area. It is true that Fumel is not a tourist destination but if you find yourself in the town you can you can look across the river from the terraces of the Chateau de Fumel.

This area is concentrated around Villeneuve-sur-Lot. While Villeneuve-sur-Lot is not an important destination for tourists, the houses along the river front here are picturesque and the church and imposing towers also merit a look.

In the region around Villeneuve-sur-Lot be sure to visit the medieval village of Pujols which although small is very lovely and listed as one of the 'most beautiful villages in France', and the village of Penne d'Agenais, another pretty village that is dominated by a basilica which has far-reaching views across the countryside. You will also enjoy a stroll around the bastide of Tournon d'Agenais, one of the most inviting villages in the central part of the Lot-et-Garonne.

There is a group of small villages here in the heart of the Lot-et-Garonne including the traditional French village of Frespech, a small but very lovely fortified village in the heart of the countryside. The medieval village of Laroque-Timbaut is also very small and very scenic and close by Beauville is a picturesque small town with several historical buildings. None of these places will take you long to explore but visited together they make for a pleasant excursion.

To the south of Villeneuve-sur-Lot around the town of Agen the Lot-et-Garonne is often equally beautiful but does not have the tourist numbers or important sites and monuments you will find in the north of the department.

Agen itself is well known for being close to the popular theme park at Walibi but also has several of its own historical treasures as well as having more shops and restaurants than any other town in Lot-et Garonne: it is the prefecture town of Lot-et-Garonne.

The region around Agen and on the border with Tarn-et-Garonne is quite undiscovered by most visitors and one of our favourite areas for a peaceful getaway. Villages to visit include Puymirol, the oldest bastide town in Lot-et-Garonne and with several important medieval buildings, Caudecoste and the fortified village of Sainte-Colombe-en-Bruilhois.

There are also a good number of small villages and quiet market towns largely undiscovered by tourism to explore to the south of the department including Nérac, best known for its castle and with several other interesting historical buildings to discover, and Casteljaloux, a quiet town that makes for a pleasant stroll when you are in the region. Nearby Barbaste which has an imposing 13th century water mill and 12th century bridge across the river.

To the south of the department Lot-et-Garonne merges into ancient Gascony, while to the south-west we see the start of the enormous forests of the Landes department. The small medieval town of Mezin is very much traditional of those in the southern Lot-et-Garonne and Poudenas is small but has a castle and several other sites of interest. The small village of Villeneuve-de-Mezin is usually visited for its unusual 12th century fortified church

Map of Lot-et-Garonne and places nearby