Villereal is a historic town on the Dropt river in the north of the Lot-et-Garonne department of Aquitaine, to the north of Monflanquin and Villeneuve-sur-Lot (close to the border with the Dordogne department).

The town was founded in 1269 by Alphonse de Poitiers as a French bastide town, although the town was occupied by the English during most of the Hundred Years War. The town saw further action during the wars of religion, being taken more than once by the protestants - in 1569 some of the residents were murdered by protestants from Bergerac and in 1572 the church was burned.

During the Hundred Years War Villereal was surrounded by deep moats, but these have been filled in and were in the position of the 'ring road' that circles the historic centre of the town.

France This Way comment:  Villereal is a lively and attractive small town with some interesting highlights and lots of back streets to explore. The town has 'real' shops rather than tourist shops, and is active all year around so is a good place to visit at any time.

Parking is usually available in the town centre out of season, or on the ring-road and in a large car park during the summer. In any case, the parking is close to the town centre and you will quickly find yourself in the historic heart of Villereal. Like many bastide towns you will find there is a large central square surrounded by medieval arcades and ancient houses, and a second square that contains the village church. 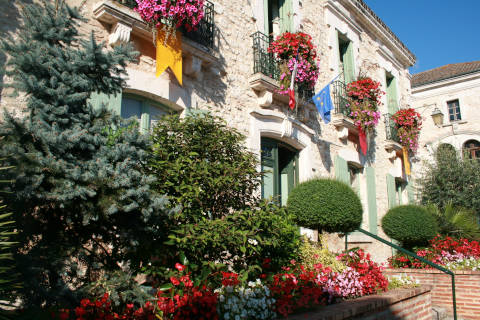 The most unusual and interesting feature of Villereal is its 14th century market hall, with impressive carpentry work and an unusual half-timbered first floor - one of our favourite medieval market halls in France. The hall dominates the central square and markets are still held under the hall every Saturday morning, as they have been for the last 700 years. The market caters predominantly to locals rather than tourists so is quite lively even outside the summer months.

If you are here in the summer we recommend you visit the night market held each Monday evening. With local entertainment, a chance to enjoy local produce at a reasonable cost and a lively atmosphere these night markets have become a major attraction in Villereal in recent years.

Around the edges of the square there are some very picturesque half-timbered houses and the stone town hall. There is also two popular cafes in the town centre, with plenty of outdoor seating where you can sit and watch the world passing by. Various other shops and cafes are also to be found here and in the surrounding streets.

Pick up the leaflet "A guided walk through the bastide" from Villereal tourist office while you are here in the main square. There are lots of things to see in the side streets that you might otherwise miss such as the Leper House with its elaborate sculpted door and old stone sinks whose outflow pipes can still be seen sticking out from some buildings and the leaflet will add to your enjoyment.

The fortified Church of Notre-Dame in the adjacent square is also interesting to see. Originally surrounded by a moat and reached by a drawbridge, these early defences became unnecessary when the whole town became fortified. The church tower that now contains the clock was once a small prison.

You enter the church through the front entrance with its series of gothic arches, below the unusual open balcony in the facade. Inside, there is a curious porch that I think is a mock-gothic structure from the 19th century but I am not certain! Likewise, the altar with its row of statues and 'Agnus Dei' and the stained glass windows are interesting but perhaps quite recent.

The area in the narrow streets below the church is among the best for seeing the medieval houses looming over narrow alleys although you will enjoy seeing the old houses all around the centre of Villereal.

Note: if you have visited Villereal in the past you will probably find it quite different now: the entire centre of the village has been upgraded with new paving in the squares and trees planted, and a good number of the ancient houses have been renovated in recent years, so it is perhaps time for another visit!

Villereal has all necessary facilities for a visit such as banks, petrol stations, a supermarket and several cafes. 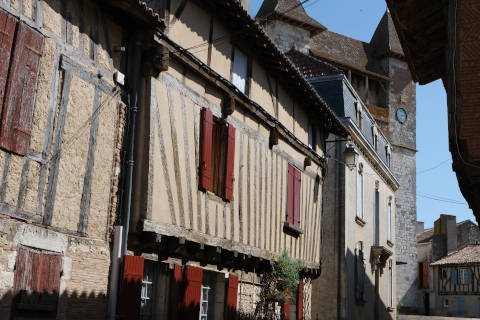 Disclaimer: we have lived near Villereal for several years and can confirm it is still one of our favourite traditional small towns in France despite us spending a large part of our time travelling and exploring elsewhere in all parts of the country!

Another useful leaflet describes popular tourist circuits around the town, including three car routes that pass the places of interest near to Villereal. Among the attractive medieval towns nearby visit Monpazier, Issigeac (very well known for its Sunday market) and Monflanquin, and the castles at Gavaudun and Biron are also recommended.

One other interesting characteristic of the region around Villereal is the existence of two unusual (and very impressive) types of rural architecture. You will see both pigeonniers and maisons a empilage during your visit - the latter are especially fascinating, with only 50 of these 'dark ages' houses still in existence.

To the north, the Dordogne river and castles are easily accessible. Villereal is also part of the Dropt valley, which passes through some of the less visited towns of the region to the west.

Map of Villereal and places nearby

Visit near Villereal with France This Way reviews

Plan your visit to Villereal, Lot-et-Garonne

Regular market(s) are held in Villereal each Saturday.

A seasonal market is held in Villereal on Wednesday. (Markets are held in the morning unless stated.)

The French version of this page is at Villereal (Francais)