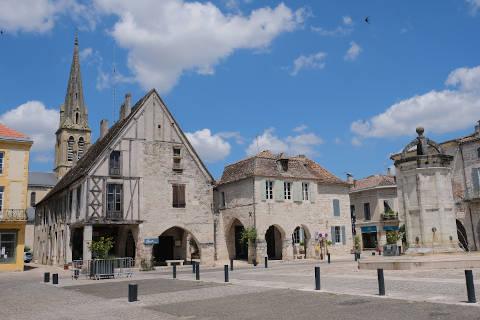 Eymet is a pretty bastide town in the south-east of the Dordogne department, with a good number of ancient houses and monuments to remind us of its history. It is an attractive and unspoiled town with a thriving central square, and it is in a pretty location on the banks of the Dropt river - it was the transport links along the Dropt that originally enabled Eymet to flourish.

Eymet was founded 1270 by Alphonse of Poitiers, like many of the French bastide towns, as part of a defensive strategy against the English. The site on which Eymet was built had already previously been occupied during Roman times and in the prehistoric era.

Start your visit at the Eymet tourist office which can give you more details of each of the highlights and also two suggested driving routes in the immediate vicinity of Eymet.

France This Way comment: we suggest you visit Eymet on a Thursday morning if possible, when the town square is at its most lively with its weekly market.

The town has a layout that is very typical of the other bastide towns in the region such as Monflanquin and Villereal, with an open central square and a surrounding grid of straight roads. The bastide towns were an early example of town planning and the best of them, like Eymet, have retained their original layout.

First you will want to spend time simply exploring the village centre, with the straight streets lined with medieval houses in stone and colombage. Some of the houses bear fascinating ancient carvings and engravings, and many of the houses in the central square, called the Place Gambetta, still have the medieval arcades at ground floor level that once provided shelter to the market traders.

Other notable buildings in Eymet include the tower, gateway and ruins of the original castle, and a large 19th century church. A few hundred metres outside the main square you can also see the river frontage and a pretty bridge across the river, with the shady banks of the Dropt being a perfect excuse to stop for a picnic.

There are several restaurants to choose from in Eymet if you are here at lunchtime, otherwise just do as everyone else does and sit at a cafe and take in the atmosphere.

The countryside around the town is very peaceful, with vineyards and small farms, and perfect for exploring by car or bike. The Eymet Tourist Office suggest two routes to follow which are a good starting point:

1) The first driving route leads through several small villages and hamlets close to Eymet such as Fonroque and Cadelach. Further afield there is a great deal to enjoy along the valley of the Dropt to the east and west of the town - see Dropt Valley for details.

2) a second driving route will lead you through the vineyards to the north of Eymet via Ste-Innocence, Sadilac and St-Capraise-d'Eymet. This also makes a very lovely cycling route. Wine enthusiasts will also want to visit Duras, about 20 kilometres from Eymet.

One of our favourite historic towns in the Dordogne is Bergerac, not far to the north of Eymet (but of course we would say that since we live in Bergerac...)

After a 600 year gap since the end of the Hundred Years War Eymet once again has a reputation as being home to the English and many English retirees and families have homes in and around the town.

It is true that you are very likely to hear English spoken in the town when you visit, which can seem a bit strange in the centre of a beautiful part of France. Don't let that put you off visiting, it's a lovely town and definitely recommended when you are in the region!

Eymet is in the Dordogne department of Aquitaine, south of Bergerac and west of Castillonnes. Note that it is quite a long drive from here to what you may consider to be the more 'famous' Dordogne landmarks such as Sarlat or the Lascaux Caves, but a trip here has the advantage that it will introduce you to the quieter side of the Dordogne department.

Map of Eymet and places nearby

Visit near Eymet with France This Way reviews

Plan your visit to Eymet, Dordogne

Regular market(s) are held in Eymet each Thursday. (Markets are held in the morning unless stated.)

The French version of this page is at Eymet (Francais)