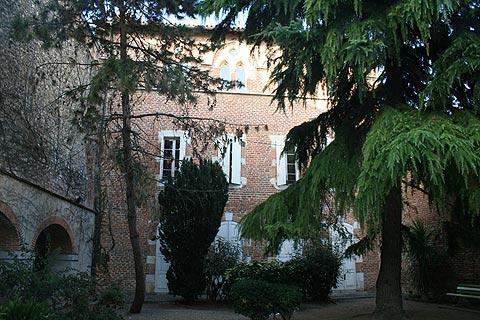 Agen is the most important (the prefecture) town in the Lot-et-Garonne department of south-west France. At first glance the town is not all that tempting and some fairly busy roads lead you through some of the less interesting parts giving you a poor first impression. But, take the trouble to park and wander around Agen and there is quite a lot to catch your attention.

France This Way comment: while Agen is worth a visit if you are in this region, it is a typical French town rather than an 'undiscovered' tourist destination and is not exceptional in the way of towns further north such as Sarlat, Perigueux or Bergerac in the Dordogne.

The main shopping street is the Boulevard de la Republique which was built at the end of the 19th century. This is a lively street and this central area of town has some good shops and plenty of cafés for when you need to relax and watch the world go by. The Place des Laitiers (dairy market) is an open square where on Saturday’s you can go to the organic market. The Gallo-Roman forum was originally on this site.

Cutting across the Boulevard de la Republique at the Place des Laitiers is the Rue des Corniers. This was the town’s main street from the 13th to the 19th century. It has been refurbished recently and as well as the beautiful buildings of the rich traders you can see examples of Gothic, Roman and Basket-handle arches in the arcades.

Take a look, too at the Ruelle des Juifs, one of the roads leading to the Place des Laitiers. This ‘Jewish Alley’ is the old medieval banking area. For a step back in time go to Rue Beauville, a narrow, cobbled, 15th century street with timber-framed houses. 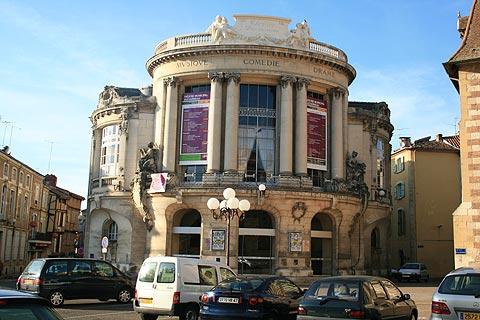 Places to visit in Agen

The oldest visible monument in Agen is the Tower of Notre Dame du Chaplet. This is an interesting syle with the lower parts built in stone and above this built in brick. Originally this was a part of the town’s defences and in the 11th century formed part of Agen’s remparts. Later it became the belfry of the Benedictine monastery.

The cathedral has been damaged and renovated many times since it was begun in 1279. It is now an amalgum of various styles. It has a particularly fine Roman chevet and very nice chapters. It did not become the cathedral until 1796 after the destruction of St Etienne.

This is found on the Rue Puits de Saumon and is the oldest private residence in Agen. It is a lovely 14th century stone building that looks like it was once perhaps a church.

The Museum of Fine Art

This is housed in four lovely mansions dating from the 16th and 17th centuries and the buildings themselves are well worth a look. The museum is one of best in Aquitaine. In its collection are 5 paintings by Goya.

Next to the Museum of Fine Art is the wonderful building housing Agen’s theatre. It is a round Italianate structure with large windows and tall pillars 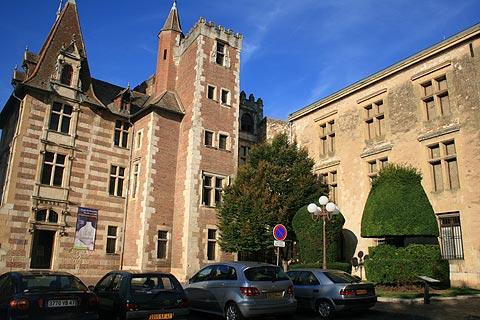 Near to the theatre is the church of Notre Dame du Bourg with its unusual triangular, but one-sided bell tower. It is largely built in brick whereas most buildings in Agen are stone.

A slightly incongruous note in the otherwise fairly classical syle of Agen is the Art Nouveau House built in 1901. Art Nouveau architecture is fairly rare in the south of France making this even more of a treat.

The Prefecture to the south of the town centre was formerly the bishops palace. Its 100m façade is a fine example of architecture of the Louis XVI period.

Next door to the Prefecture the Law Courts is another imposing building, this time in the style of Napoleon the III.

Other sights in Agen

After a tour of Agen’s architecture take a stroll along the esplanade, a long wide promenade next to the river Garonne. Le Gravier, a public garden with lots of lawns and flower beds, next to the esplanade make this a nice place to relax. A market is held here every Wednesday and Saturday. You can cross the river using the pedestrian footbride - La Passerelle.

Higher up the river is the impressive canal bridge. It is 10 metres high and carries boats on the Canal des Deux Mers (Canal of the two seas as it links the Atlantic Ocean with the Meditarranean) across the River Gironde. The bridge is 580m long, the second longest canal bridge in France. After the bridge there are 4 locks allowing boats to descend the 12.5m to the canal on the other side of the river.

For those of you with children Park Walibi, a large theme park, is on the edge of Agen and will amuse your children for the day.

Map of Agen and places nearby

Visit near Agen with France This Way reviews

Plan your visit to Agen, Lot-et-Garonne

Regular market(s) are held in Agen each Wednesday & Sunday & Saturday. (Markets are held in the morning unless stated.)

The French version of this page is at Agen (Francais)