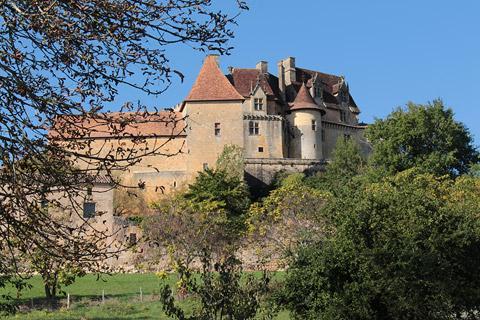 Chateau de Biron is a castle in the village of Biron, towards the southern border of the Dordogne region with the Lot-et-Garonne and close to the medieval town of Monpazier.

France This Way comment: the large rooms in the castle are rather empty and we would have preferred to see them furnished in period style but the architecture of the Chateau de Biron and the views from the terrasses are exceptional so a visit is definitely recommended.

Standing on a hilltop, the castle can be seen from many vantage points in the area - each time looking more impressive than the time before as you approach the castle. The views of the castle as you arrive, and then the views from the castle across the Dordogne countryside, are perhaps the highlights of your visit to Chateau Biron.

If possible we suggest you approach Biron along the road from Vergt-de-Biron or the road from Lacapelle-Biron, to see the castle at its best. Otherwise you can always walk a short distance along these two roads from the village to see the views of the castle... 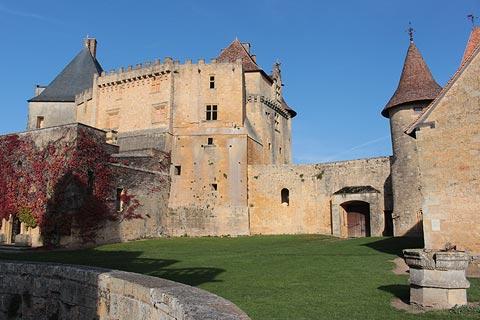 The history of the Château de Biron starts with its construction in the 12th century. The castle then underwent various periods of improvement that continued until the 18th century: during this entire period it was owned by the Gontaut-Biron family.

An active castle from the time of the cathar wars in the 13th century, the Chateau de Biron underwent an important transformation in the 15th century after the end of the Hundred Years War when it was made more comfortable with the addition of windows and many other enhancements, often in the renaissance style. When you visit you can see that there are medieval sections and renaissance sections within the castle.

Troubled times were to return with the wars of religion in the 16th century, during which the Gontaut-Biron family were out of favour with the King. This situation continued until the 18th century, when the family were at last able to continue with their improvements to the castle.

With the revolution in France the castle again fell to neglect, and the family once again had to fight to keep and improve the Chateau de Biron. They retained the castle until 1978 when the family sold it to the state after owning it for 24 generations.

Biron castle is now renovated and open to the public. You enter the castle along a ramp from centre of the upper part of the village of Biron. Even before you reach the ticket office you can see the main courtyard surrounded by the principal buildings of the castle.

On your right as you enter from the ticket office is a fascinating 16th century chapel, on two levels - the lower chapel (outside the castle walls) was for the villagers, and the higher chapel (inside the castle) for the lords, who believed they should be a little bit closer to heaven at prayer time.

Leaving the Lords chapel, on the other side of the courtyard the stables and the 'Tour de la Recette' are to the right and the principal buildings to the left. The Tour de la Recette was built with a military function in the 16th century on the site of an older chapel but takes its name from the 18th century when it was used as a centre for local tax collection ('recette' = 'receipt').

Within the walls of the chateau you will see some beautiful rooms dating from the different periods of construction that Biron has passed through, with a wide range of architectural styles. Among the rooms you will see are the kitchens, bedrooms and an ancient bakery.

The Cour d'Honneur is surrounded by the main towers and living accommodation of the Chateau de Biron and has a large terrace overlooking the countryside to the north. This is the best place to contrast the different periods during which the castle was built, with medieval buildings to the south, 16th century additions on your right and the 17th and 18th century additions of the Batiment des Marechaux and the Henry V Tower in the classical style to your left.

You will also enjoy the views from the top of the Tour Anglaise: you can see a great distance across the Dordogne countryside from the castle. Now a mixture of wooded areas and open fields, remember that all this land was covered by forests until the 18th century.

In recent years the Batiment des Marechaux and the Henry V Tower to the left of the Cour d'Honneur have been used for impressive exhibitions of contemporary art during the summer and Chateau de Biron has been used on several occasions by filmmakers. 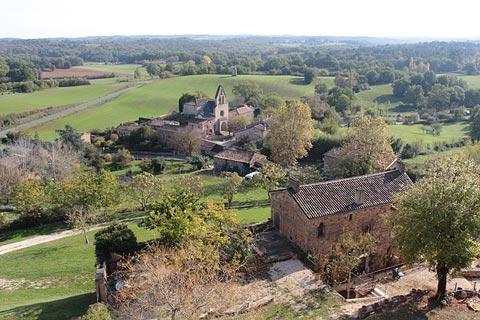 The Chateau de Biron is explored at your own pace with a detailed written guide or an audioguide (extra charge).

The castle is closed in January and closed on Mondays in February, March, November and December except during school holidays. From April to June and September to December the castle is open 10:00 - 17:00 (sometimes later) but closes for lunch from 12:30-14:00. During July and August it is open from 10:00 - 19:30. Last admission is one hour before closing.

There are more facilities (cafes and restaurants) at Lacapelle-Biron a few kilometres to the south, while children will be attracted by Parc en Ciel - a treetop adventure parc nearby. Continue south along the Gavaudun Valley to see the village of Saint-Avit and the village and castle at Gavaudun.

A few kilometres from Biron you will certainly want to visit the exceptional historic village of Monpazier. See also more Dordogne castles.

Map of Chateau de Biron and places nearby

Visit near Chateau de Biron with France This Way reviews