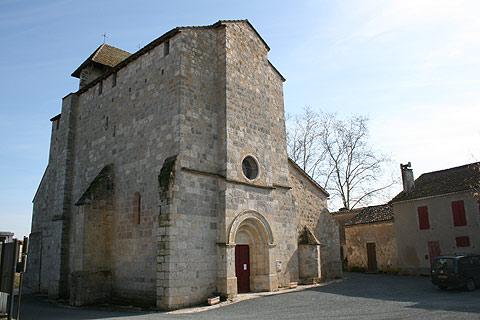 Villeneuve-de-Mezin is located on the southern border of the Lot-et-Garonne department of Aquitaine, south-east of the department capital, Agen, and about 20 kilometres south of Nerac. The village is part of the commune of Lannes and is on the border with the Gers department, so it also forms part of the ancient Gascony region.

Villeneuve-de-Mezin itself is a small, sleepy village set in the peaceful countryside of the 'Pays d'Albret', and is included here as typical of many little villages in the region. 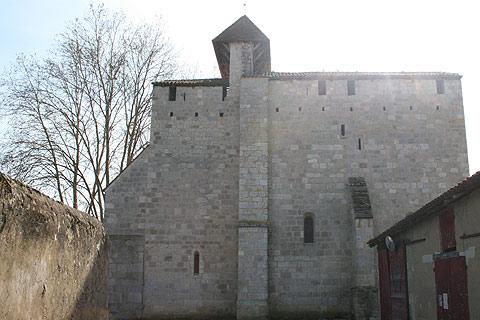 It won't take long for a little stroll in the village (rather, a large hamlet): the main reason to stop here is to see the Church of Saint-Jean, a fortified church which dates from the end of the 12th century.

The church of Saint-Jean in Villeneuve-de-Mezin is interesting because it was once part of the fortifications of the village, and is thought to have originally been the castle keep. The entrance of the church preserves its original roman style arches and decorations.

Above the church in the same building there is a large room which is where the soldiers were originally based, reached by way of a staircase within the facade of the church. The staircase also gives access to further defences higher up in the church.

Inside the church you can see some traces of ancient frescoes as well as other wall and ceiling paintings.

There is also a restored lavoir and a fountain to see in the centre of Villeneuve-de-Mezin. 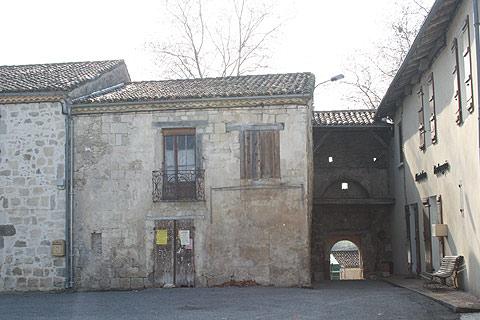 There are several other hamlets and small villages in the region, each with their own individual characteristics and typically being a cluster of houses around a small church, and together giving a good impression of the peaceful agricultural France of previous centuries. Mezin itself is close by and has an attractive centre with arcaded houses and a church.

Close to the south there is a cluster of classified 'most beautiful villages in France' with Fources, just a few kilometres from Villeneuve-de-Mezin, being the closest. The village of Larressingle is close by and a very interesting example of a fortified village.

Map of Villeneuve de Mezin and places nearby

Visit near Villeneuve de Mezin with France This Way reviews