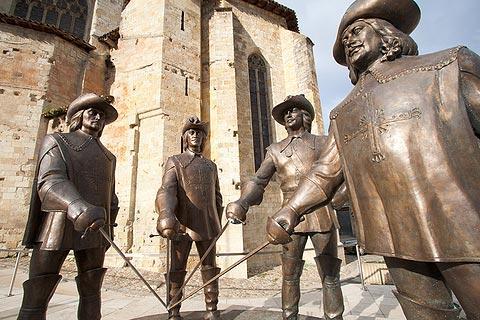 The town of Condom is situated to the west of Lectoure and south of Nérac in the Gers (Gascony) department of south-west France.

The town was once an important stopping point on one of the pilgrimage paths to Santiago de Compostella, around which the town developed, with wealth in more recent centuries based around the production and export of armagnac (a popular form of brandy) - initially the trade was based around the port in Condom from where the armagnac was sent to Bordeaux.

Condom is now a quiet rural market town and the imposing cathedral and a few monuments of interest in the historic centre make the town interesting to visit. Before you start exploring, visit Condom Tourist Office on Place Saint-Pierre to ask for the map that shows a suggested route to follow (1 1/2 hours) and the principal places of interest in the town.

The principal highlight in Condom is the Cathedral of Saint-Pierre and its associated cloisters. The cathedral was built at the end of the 14th century, then substantially rebuilt in the early 16th century, mostly in the gothic style. On the outside of the cathedral the very large upright supports every few metres down the sides of the building are typical of the gothic style and allow large windows to be included right along both sides. 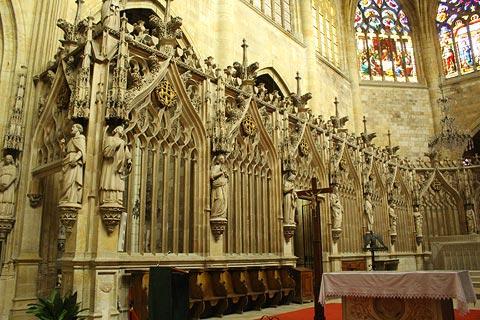 The cathedral entrance on Place Saint-Pierre is ornately carved with 24 Biblical personnages while inside the cathedral there is an interesting statue of a seated Saint-Peter as well as an impressive series of ornate carvings all around the choir and 19th century stained-glass windows. The main facade is to the west of the cathedral on Place Bossuet, where you can also see a substantial square tower added in the 19th century.

While you are here in Place Bossuet, you can also see a 13th century tower, the Tour Anger d'Adiran, where the Abbot Anger d'Adiran once lived.

The cloisters adjacent to Condom cathedral cloisters are also in the gothic style, with a series of large pointed stone arches, although the lack of a garden or grass means the cloisters here in Condom lack the charm of many we have seen elsewhere in France.

The last part of this religious complex is opposite the cloisters and a short distance north of Place Bousseut - the Bishop's Chapel in renaissance style and the Old Bishop's Palace are now used as the Trubunal and Subprefecture offices for Condom.

As well as the cathedral there is a small medieval old town to visit with some pleasant streets to explore - Condom is a quiet, relaxing town where you won't feel the pressure to rush around but you will be pleased you stopped for a visit. One of the oldest medieval streets in Condom is the short Rue Charron from the west of Place Saint-Pierre to Place du Lion d'Or.

You will see medieval houses on the Place du Lion d'Or  - as early as the 13th century this square was a regional centre for trading Armagnac. There are also some grand 18th century townhouses with stone balustrades and ironwork balconies here and elsewhere in Condom: the Post Office on Rue Gambetta and the Maison de Loubiére (now a restaurant) at the west end of the Place Saint-Pierre are typical examples but there are lots of others as well.

Don't forget to try the local brew while in Condom - Armagnac is produced here and there are several places where you can try a sample. There is also a small museum dedicated to explaining the art of armagnac production just north of the cathedral facade. 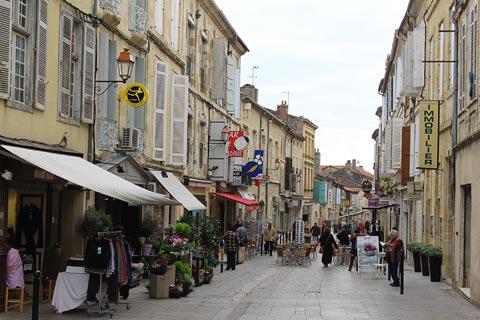 The market in Condom takes place on a wednesday morning in the square next to the cathedral.

Just to clear up any misunderstanding, there is no connection whatsoever between the town and the contraceptive device, they just happen to have the same name. For all that, many people like to stand grinning for a photo next to the sign bearing the town name!

To visit near Condom

After exploring the centre of Condom you can stroll along the banks of the Baise river or take a boat trip.

There are lots of small villages nearby in the gentle Gascony countryside that are of interest, including Fourcés and Montreal-du-Gers. Our own favourite sight here is the fortified village of Larressingle, an unspoiled little place that appears unchanged since the middle ages.

Map of Condom and places nearby

Visit near Condom with France This Way reviews

Plan your visit to Condom, Gers

Regular market(s) are held in Condom each Wednesday all day. (Markets are held in the morning unless stated.)

The French version of this page is at Condom (Francais)