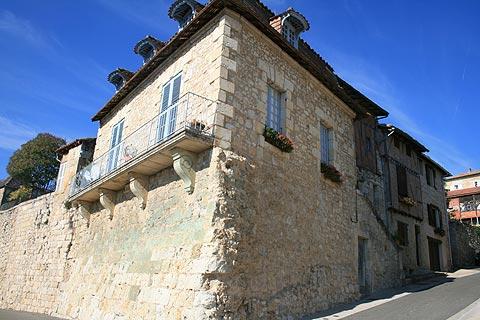 Lectoure is a small town in the Gers department of the Midi-Pyrenees, north of Fleurance and east of Condom. Once an important stopping point on the pilgrimage route to Saint Jacques de Compostelle, Lectoure is nowadays more visited for the surrounding Gascony countryside, foie gras and armagnac.

Lectoure was originally the capital of the historic Lomagne region, lying between the rivers Gers and Garonne, that was once the base of the counts of Armagnac. In 1472 Louis XI entered the town on false promises and proceeded to kill the count and damage the town. When nearby Auch became the capital of Gers, Lectoure became a much quieter town.

Lectoure sits high above the Gers river and as you wander around the town there are many splendid views of the farming landscape below. 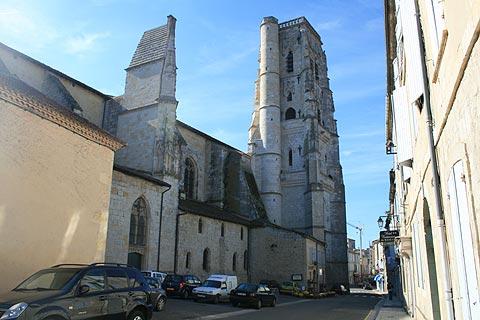 It is an attractive town whose centre follows one main street with a pretty hospital and the town’s thermal (spa) station at one end and the Cathedral of Saint Gervais and Saint Protais at the other. Between the two there are various other buildings that will catch your attention, including some imposing 18th century townhouses.

The cathedral in Lectoure was built in the 15th century after Louis XI destroyed the previous one, and has a striking tower with a round turret attached to the bell-tower. This was once one of the tallest church spires in France but the higher level was destroyed just before the revolution.

Next to the cathedral is Lectoure tourist office and also the town hall. The town hall was originally the Episcopal palace, in the 17th century, and in its cellars there is a museum that contains 20 Gallo-Roman altars decorated with sacrificial animals.

Wander down the street below the town hall and you can see the Fontaine Diane. This is a natural spring inside a little gothic building that at one stage provided the source of water for an active tannery industry in the town. Diana's Fountain dates back to roman times, though much of the structure that you see now dates from the 13th century and later.

Elsewhere as you explore Lectoure you will see a good number of interesting stonework and attractive buildings, including some large 18th century mansions. One of these, once the Hotel de Castaing, is now the Hotel Restaurant de Bastard and looks very pleasant. 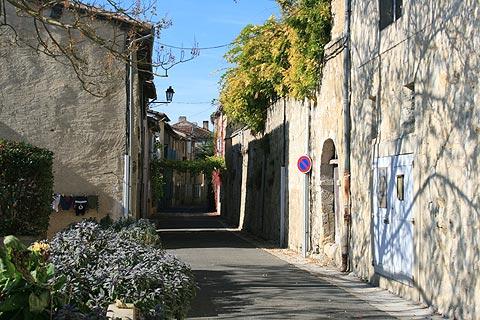 A short distance to the east of Lectoure you can visit the Chateau de Gramont, an attractive and carefully furnished small castle.

There are various other interesting small towns and villages in this part of Gascony south of Lectoure, such as Fleurance, Condom and Lavardens - although many visitors find the countryside so relaxing they don't venture very far!

Map of Lectoure and places nearby

Visit near Lectoure with France This Way reviews

Lectoure is classified as a recommended detour town (plus beau detour)

Plan your visit to Lectoure, Gers

Regular market(s) are held in Lectoure each Friday. (Markets are held in the morning unless stated.)

The French version of this page is at Lectoure (Francais)