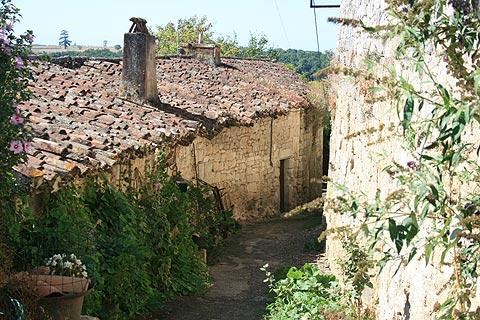 Laroque-Timbaut is a small village located between Agen and Villeneuve-sur-Lot in the south-eastern Lot-et-Garonne, where it is within the 'Pays de l'Agenais' region.

The village of Laroque-Timbaut has a sleepy medieval centre dominated by its traditional market hall (dating from the 12th century) and an ancient clock tower - the Tour de l’Horloge. Most of the commerce of this small town is elsewhere, making the Place de la Halle a very tranquil spot to sit and admire the buildings and the view over the valley. 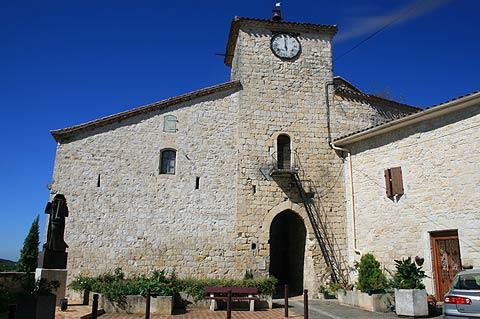 Wander through the stone arch in the clock tower and into a narrow passage - The Rue du Lo - with the donjon on the right and old stone cottages on the left.

The donjon is all that remains of a castle which was built in the 13th century and demolished by the villagers before the French Revolution in revenge against the last Seigneur and is now the water tower for the village, and the houses in the street were once the accommodation for the servants who worked in the castle.

As you descend the passage you look down on the lovely terracotta roofs of some more cottages, unfortunately falling to ruin and here there are fabulous views over the tree-filled valley below.

One day this passage will have all its buildings renovated and the edges planted and it will be fantastic, but even now it’s very pleasant and you can keep walking down to the roue Empire, a large water wheel built in 1845 which provides the village with water.

The Church of Notre-Dame in Laroque-Timbaut looks quite un-interesting from the outside, typical of 19th century churches in France, but contains some attractive stained glass windows, an altar with a painting of Christ, and an impressive ceiling with stone ribs and red bricks.

Also in the village centre you can see the town hall for Laroque-Timbaut, an unremarkable building from 1907 except for the unusual belltower addition to the roof, and a traditional well, a 12th century market hall and a clocktower that originally served as lookout tower for the village.

Note: it is said that one of the armies of Charlemagne passed through Laroque-Timbaut in 778 and according to legend was cured of an epidemic by the waters of the valley. 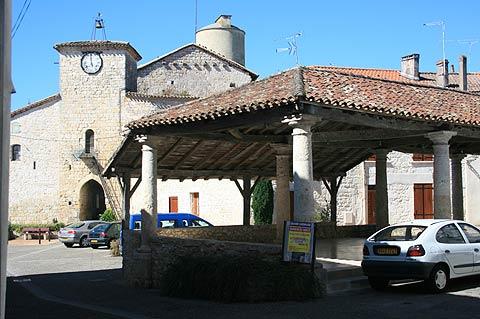 The region around Laroque-Timbaut is relatively undiscovered by tourists, and retains a great deal of authentic rural charm. There are also numerous small and unspoiled villages to stroll around, often with small medieval churches. Among the most popular with visitors are those at Penne-d-Agenais and Pujols, listed as one of the most beautiful villages in France. These two villages are both a short distance north of Laroque-Timbaut.

Map of Laroque-Timbaut and places nearby

Visit near Laroque-Timbaut with France This Way reviews

Plan your visit to Laroque-Timbaut, Lot-et-Garonne

The French version of this page is at Laroque-Timbaut (Francais)