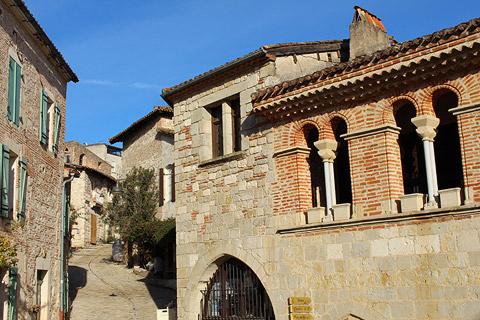 Penne d'Agenais is a small village a few kilometres south-east of Villeneuve-sur-Lot, on the River Lot and in the Lot-et-Garonne department of south-west France. It is a very pretty place to visit and was once a stopping point on one of the pilgrim paths to Santiago de Compostella.

The village can be considered as consisting of two parts: the historic village, entered through one of the medieval gateways that pass through the ramparts that still surround Penne d'Agenais, and a grassy area on the hill above the village where you can see the basilica and the remains of an ancient castle. 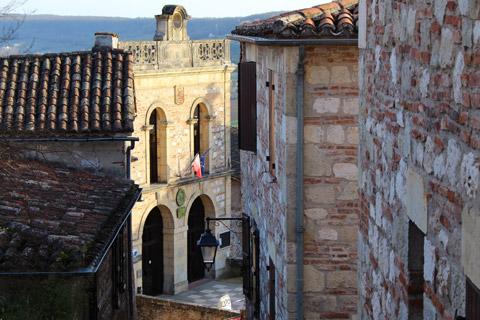 Penne d'Agenais is almost a one-street town - start at the bottom of the town and keep walking upwards and you won't go far wrong, although there are some interesting small alleys and passages to investigate en-route. There is also a small open area with a cafe in front of the mairie for the village.

You will see lots of attractive houses and buildings here in the centre of Penne d'Agenais, most of them carefully renovated in recent years. There are also a couple of 'arty' type shops and nicely located cafes to stop and enjoy the atmosphere.

The architecture has a couple of unusual features: several of the buildings incorporate gothic style windows with stone columns; and many of the houses use a large amount of small red bricks in their construction, which is typical around Toulouse to the east of here, but unusual in this part of Lot-et-Garonne.

From various places in the centre of Penne d'Agenais you also have nice views across the surrounding countryside.

The basilica and castle

At the top of the hill above the village is the substantial basilica of Notre-Dame du Peyragude, surrounded by plenty of open areas suitable for your picnic. When you arrive at the basilica you will find it is a 20th century construction (built between 1897 and 1948) that attempts to combine elements from roman architecture with elements from the byzantine style: not necessarily a great architectural success but interesting to see and with exceptional views.

The church is the most recent of several to stand here, with earlier churches destroyed in the Albigensian Crusade and the Wars of Religion. It was following the second of these destructions that a miracle was reported here, with the Virgin appearing and providing food to a shepherd boy sheltering in the ruins (as a consequence the church is still a place of pilgrimage). Ruined again after the revolution, it was at the end of the 19th century that the decision was made to erect a new church here.

Inside the church you can see the inside of the dome and chapels, which are decoratively painted, and the stained glass windos.

There are also some caves containing shrines at the top of the hill behind the basilica, and a table d'orientation explaining the many villages you can see in the distance. There are also some remains of an ancient castle: not much to see but if you clamber up the castle walls you have the best view across the basilica to the Lot River beyond... 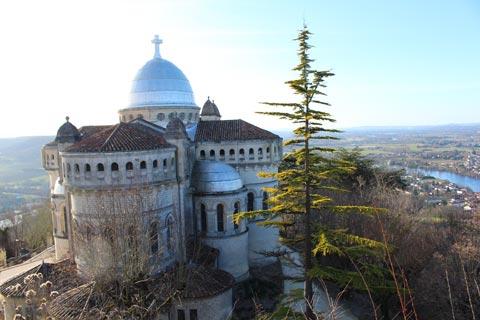 After exploring the medieval village and castle you can visit the Lot River and the 'Port de Penne' - the ancient port for the town.

There are several equally interesting villages to explore in the region, with the small village of Pujols and the bastide town of Monflanquin (both are classified 'most beautiful villages of France') being among our personal favourites.

Map of Penne d'Agenais and places nearby

Visit near Penne d'Agenais with France This Way reviews

The French version of this page is at Penne d'Agenais (Francais)