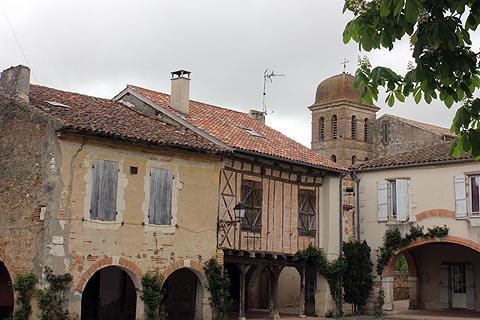 Caudecoste is a pleasant 13th century bastide town in the Lot-et-Garonne department on the border with Tarn-et-Garonne and also very close to the Gers department. 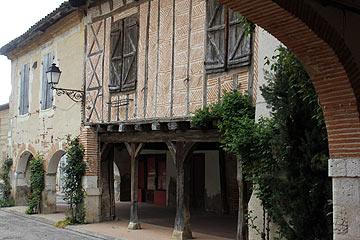 With roots in Gallo Roman times the village was originally much smaller with notables living in the village and peasant farmers living on the plains surrounding the village.

Always a little prone to flooding the area suffered a terrible flood in 1270 when the Garonne flooded its banks in what is thought to be its worst ever flood.

The village itself is situated higher than the surrounding plains and escaped the flooding but it was not big enough for all the farmers who no longer wanted to live on the flood-prone plains. A decision was made to increase the size of the village and the bastide village that you see today was built. It was built as a bastide with the grid-like pattern of construction bastides all share.

Much of the village today dates from these times though some date from the 17th century having been built following the siege of Caudecoste during which most of the population were massacred and some houses burnt in fires.

The houses in Caudecoste are a mix of stone houses and half-timber houses and around the main square, the Place des Cornieres, many of the buildings have attractive arcades. Around the outskirts of the village some vestiges of the original remparts remain and can be seen.

The neighbouring village of Dunes is very attractive. Dunes and Caudecoste share a sad history of the war as 12 men were hung by the Nazis in the centre of Dunes, one of whom was a Caudecoste villager.

Moissac with its famous cloisters is to the east of Caudecoste as is the "most beautiful village" of Auvillar with its unusual circular market hall.

Whilst driving round the local countryside we suggest you also stop to admire the pretty villages of Bardigues, Le-Pin and Saint-Antoine.

Map of Caudecoste and places nearby

Visit near Caudecoste with France This Way reviews

Plan your visit to Caudecoste, Lot-et-Garonne

The French version of this page is at Caudecoste (Francais)