Château de Gavaudun is situated in the beautiful and quiet Gavaudun Valley (on the River Lede), that runs between Lacapelle Biron (and Chateau Biron) to the north and towards Monflanquin to the south, in the north of the Lot-et-Garonne department.

It is the setting and the castle donjon (keep) that is the highlight of a visit to Gavaudun. Perched astonishingly on a jutting out rocky outcrop, the castle at Gavaudun towers over the village below, and over the valley which it was built to guard over.

France This Way comment: We live quite close to Gavaudun and I cycle along the valley and through the village about 25 times a year. It is one of those rare places that never fails to impress, even after numerous visits - a rare achievement among the many hundreds of places we have visited all across France. 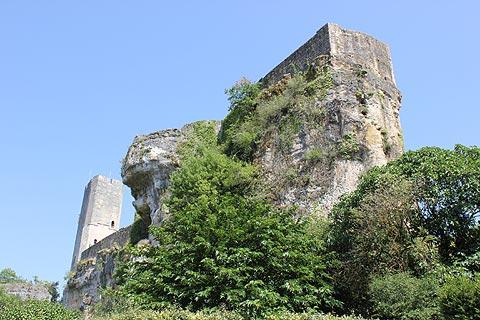 The castle was built in the 11th century, in a highly strategic location - the Gavaudun Valley was the main communication route between the Perigord and Agenais regions. Hence the Chateau de Gavaudun played an important role in the region. The original castle was destroyed in the 12th century and rebuilt in the 13th, and it subsequently played a key role in the victory against the English occupation of France.

Apart from its military history, Gavaudun has been occupied since early prehistoric times, and for many centuries had a tradition of iron ore mining and treatment, then later (from about the 17th century) in the manufacture of paper - both industries dependent on the river passing through the valley.

In the middle ages Gavaudun Valley was also a place where lepers got sent - the 'lepers cave' is near the village.

There isn't a great deal to see inside the castle, but a visit is still recommended. Even entering the castle is not for the feint-hearted, as you climb up a dark, poor condition stairwell hacked into the rock. There are good views down the valley from the top of the 70 metre high donjon, if your nerve holds out!

The village which developed around the castle is also picturesque, with the quiet river Lède passing through the centre of the village and some ancient houses to admire - there are two substantial houses right on the river in Gavaudun: one opposite the castle entrance and the other a little downstream at the exit of the village. The small Church of Laurenque dates from the same period. 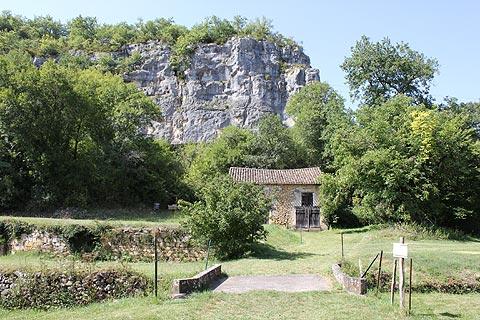 At the north end of the valley you can visit the village of Lacapelle-Biron where you can see the 'monument to the deported' in the town centre, which commemorates the many people deported from the region during the second world war - specifically on 21 May 1944 when 47 men from the village and many others from the region were deported to the concentration camps - out of 118 deportees only 24 were to return.

See more castles in France. You can find more travel ideas in the Lot-et-Garonne guide and the Aquitaine guide.

Map of Chateau de Gavaudun and places nearby

Visit near Chateau de Gavaudun with France This Way reviews