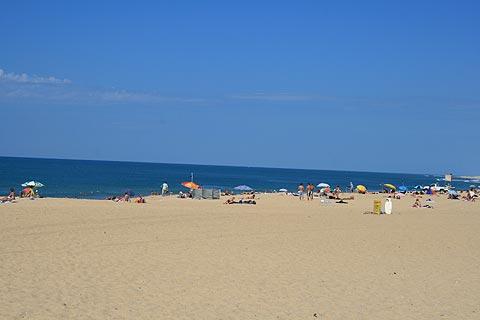 It is the long, very long (more than 100 kilometres) of Atlantic coast that is the main attraction in the Landes department of Aquitaine, with the fine sandy beaches along the Cote d'Argent perfect for families, surfing, and any other sea-based activity....and also the chance to explore the extensive pine forests of the Landes

The numerous resorts along the Atlantic coast - known as the Cote d'Argent - attract visitors to the Landes department. These are popular due to the long and uncrowded sandy beaches, the pleasant modern resorts and the reliable summer time weather, and also because many of the beaches are ideal for surfing.

Elsewhere in the Landes not far from the coast there are various leisure opportunities, often walking and cycling in the extensive pine forests.

Resorts on the Cote d'Argent in Landes

Many of the towns along this section of coast are quite recent in development and share similar characteristics. A typical 'Landaise' coast resort has the Atlantic Ocean to the front (the waves can be quite high) with a long sandy beach and various beach activities.

Next to the sea there is a usually a modern resort type village offering all facilities and activities, and accommodation in holiday apartments or on camping and caravan sites.

Beaches at Biscarrosse, Mimizan and Capbreton

Several of the popular resorts also have access to lakes and lake beaches just behind the town, which is useful for when the famous surfing waves become a bit much or if your children are small! The large forests of the Landes behind the coast allow various leisure activities such as cycling and horse-riding.

The resorts include Biscarrosse and Mimizan towards the northern end (to the south of Arcachon) and Capbreton and Hossegor towards the southern end of the coast (a little north of Biarritz). Others between the two, hence further from important towns, include Contis, Lit-et-Mixe, Viille-Saint-Girons, Moliets-et-Maa, Messanges, Vieux-Boucau-les-Bains and Seignosse.

Note that access to the Cote d'Argent from 'inland' France isn't always easy - not many main roads cross the dense Landais forests to reach the sea. It would be true to say that the towns further inland in the department are not a major attraction but there are several towns and villages with features of interest to visit here.

Inland regions of the Landes

The forests of the region - one of the largest forests in Europe - stand on land that was reclaimed from the marshes 200 years ago when the extensive Landaise forests were planted as part of a Napoleonic plan to reclaim the swamps that once covered the area.

The region also includes the Gascony Moors Natural Regional Park, which controls the protection of the natural environment. You can learn more about this at the ecomuseum at Sabres.

To the south of the Landes forests the Adour region is more hilly, and less forested, with small scale agriculture, woodlands, and numerous villages tucked away in the valleys.

The town of Dax contains some Roman ruins, and several of the villages have interesting Roman style churches. Dax is also one of the most important spa towns in France. There are other spa towns in the Landes, including Eugénie-les-Bains.

To the east of the Landes department around Mont-de-Marsan the countryside changes again, as the forests start to give way to vineyards - the grapes are used to produce the world renowned liqueur Armagnac.

Map of Landes and places nearby