The town of Villeneuve-sur-Lot is in the Lot-et-Garonne department of south-west France, about 30 kilometres north of Agen. The historic bastide town of Villeneuve-sur-Lot has now largely given way to a much larger town that surrounds the historic centre, but despite this development there are still some interesting features to discover in the town.

France This Way comment: although not one of the most beautiful towns of the area, Villeneuve-sur-Lot does have some attractive buildings and parking is easy and free on the edge of the town, so it is worth taking the trouble to pass an hour exploring if you are in the region.

Villeneuve-sur-Lot was once surrounded by a fortified wall with six towers and eight gates. The historic centre of the town is situated between two of these old gateways, the Porte de Paris and the Porte de Pujols, which are easily spotted as you approach the town from either direction. The two gates are now classified as historic monuments. 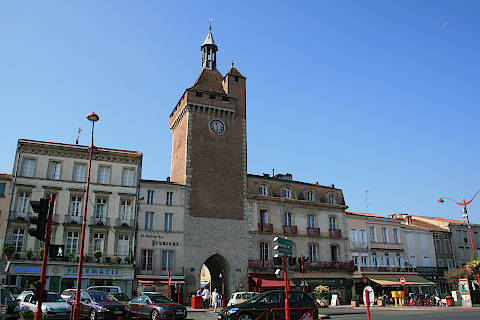 The Porte de Paris was built in the 14th century and like Villeneuve itself the tower is a mixture of stone and the red bricks more usually associated with the region around Toulouse. The third floor of the tower was once the prison (now situated in a much bigger building on the edge of town) and the fourth floor had a walkway around it enabling the tower to act as a look-out tower.

The centre of the town is now largely given over to shops (real shops not tourist shops) and makes a pleasant place to explore. Walk down the Rue de Paris - the main street between the two towers and the main shopping street of Villeneuve-sur-Lot - and on to the Place Lafayette. Place Lafayette is the main square of Villeneuve and is surrounded by arcaded shops.

The market is held here on Tuesday and Saturday mornings. This takes place in the Covered Market Hall just down from the Place Lafayette on the river. Villeneuve-sur-Lot market hall was built in 1864 of cast iron and stone in a similar style to those of Paris.

Wander down the Rue Sainte Catherine behind the Place Lafayette and you come to the wonderful Eglise Sainte Catherine. This church is unlike any I’ve ever seen. It is built from red bricks and has a wonderful elaborate tower. The church has been built in Romano-Byzantine style and was started in the 19th century and finished in 1937.

Take a look inside the church - all around the edges and high up on the walls are paintings of the saints. There is also a stained glass window that came from the 13th century church that previously stood here, and there are five gilded wooden statues that are classified historic artefacts.

Reaching the river there are three bridges that cross the Lot in Villeneuve. The old bridge, the ‘Pont Vieux’, is a 13th century bridge based on the bridge at Cahors, but has lost its original towers. However it still provides attractive views along the river valley and you can admire the Chapel of Notre Dame at the end of the bridge.

Legend has it that in the early 13th century some boatmen were stopped in the middle of the river by a powerful force. One of the boatmen dived in to investigate and emerged holding a statue of the Virgin Mary. A chapel was built here and dedicated to mariners.

On the other side of the river is a little medieval-style garden and the Chapelle des Penitents Blancs, the chapel of the white penitents. The members practiced collective penitence and carried out lots of work for the poor and sick of the area around Villeneuve-sur-Lot.

On the edge of the old town centre is the second gateway - the Tour de Pujols. This is built in the same style as the Paris tower and with the tower of St Catherines church these towers give Villeneuve a very interesting sky-line. Next to the Pujols Tower you can see some remains of the town’s fortifications.

Other points of interest in the town are the Gajac Mill which has been converted into the Art Museum of Villeneuve-sur-Lot; the Saint Cyr Hospital, a beautiful building donated to the town and which still has its original 19th century pharmacy with 500 decorated porcelain pots, and the Gallo-Roman ruins at Eysses to the north of Villeneuve.

A visit to the Villeneuve-sur-Lot tourist office (near the Porte de Paris) will provide you with a detailed map highlighting all these places of interest.

From the southern edge of Villeneuve-sur-Lot it is only a short drive to the nearby hilltop town of Pujols, a very beautiful little village.

Among the many attractions in the area we also particularly recommend you visit the village of Monflanquin a short distance to the north, and the castle and village at Gavaudun in a picturesque wooded valley.

Map of Villeneuve-sur-Lot and places nearby

Visit near Villeneuve-sur-Lot with France This Way reviews

Plan your visit to Villeneuve-sur-Lot, Lot-et-Garonne