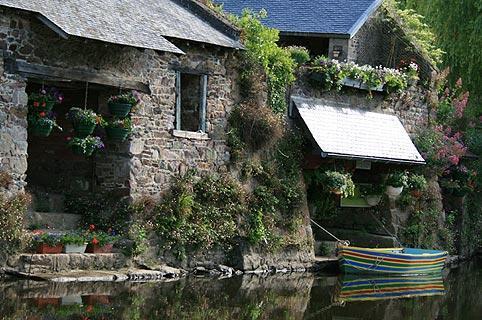 The Cotes d'Armor department of northern Brittany is most visited for its stunning coastline including the 'coast of pink granite' and many beaches, while the attractive historical towns such as Lannion and Dinan provide a fascinating glimpse into the long and colourful history of the region

The Cotes d'Armor department occupies a substantial part of the northern coast of Brittany, from beyond Lannion in the west and almost to Dinard to the east, and also the countryside to the south of this coast.

While it is to enjoy the impressive sandy beaches, cliffs and coastal scenery that most visitors come to this region, be sure to also take the time to explore some of the towns and villages a little way inland!

The best known - and most beautiful - section of coast here in northern Brittany is surely the Cote de Granit Rose, to the north-west of the Cotes d'Armor department around Perros-Guirec and Ploumanac'h and with sandy beaches and rocky coves, coastal footpaths and the famous 'pink granite' rocks. See Cote de Granit Rose.

Note that although there are several resorts here, Perros-Guirec is much larger and has more activities than the others

Here you are also close to the resorts of Trébeurden and Tregastel, while Lannion to the south-west of here is a charming town and Saint-Michel-en-Greve also has a sandy beach. Near Lannion you can visit Pleumeur-Bodou with a planetarium and "village gaulois" among the attractions.

Travelling east from the Granite Rose coast, the traditional fishing village at Paimpol has a harbour to explore, and from here you can also take a boat trip to visit the Ile-de-Brehat, and visit the 12th century pilgrim's abbey at Beauport (one of just 33 listed 'Grand Sites of France').

The town of Saint-Brieuc has several interesting historical buildings to see in the old part of the town, and in the bay of Saint-Brieuc the resorts of Binic and Saint-Quay-Portrieux have easy access to family friendly beaches. The viewpoint at Pointe du Roselier is very pretty.

To the north-east of Saint-Brieuc you should follow the coast path along Cap Frehel which is very picturesque, visit the resort at Le Val-André, and there are also many popular beaches to be found near Erquy and the Cap-Frehel headland, both to the east and the west.

The Cap d'Erquy next to Cap Frehel is also a 'Grand Site of France', and we suggest you follow your walk along the headland with a trip to the nearby Fort-la-Latte.

For the coast nearby around Saint-Cast-le Guildo and Saint-Jacut-de-la-Mer see Emerald Coast.

The town of Lannion is a large and busy town to the west of the department, while just south of the Cote de Granit Rose in Cotes d'Armor two particular highlights include the cathedral town of Tréguier and the river views in the town of Pontrieux (to the south towards Guingamp).

The village of La Roche-Derrien has a small but interesting historic centre with some half-timbered houses, and futher inland Quintin also features some medieval buildings and a 17th century chateau, and is in a pleasant setting overlooking the broad waters of the river Gouet.

Continuing eastwards, Saint-Brieuc is quite a sprawling town but also has an area of medieval houses and a cathedral in the town centre. A little way south of here you can visit Moncontour, a town with an interesting historical centre that was once the centre of Brittany's linen production.

To the west of Saint-Brieuc the town of Guingamp is best known for its chateau and rather austere granite basilica.

In the eastern Cotes d'Armor follow the valley of the river Arguenon and take a stroll around Plancoet, then visit Dinan, an interesting historical walled town with a great deal to enjoy in its extensive historical centre (it is one of our favourite historic French towns), including numerous picturesque half-timbered houses.

In the forests south-west of Plancoet we enjoyed visiting the medieval chateau de la Hunaudaye, surrounded by a moat, while to the south of Dinan the villages of Lehon, Guenroc and Trefumel each have a lot of character and are a pleasure to stroll around.

On the southern border between the Cotes d'Armor and Morbihan, the Guerledan Lake is a very popular leisure destination with a wide variety of leisure opportunities both water based and marked trails through the surrounding forests.

You will also find similar activities including boat hire available on the Nantes-Brest canal in this region.

Also in the south of the Cotes d'Armor department an unusual attraction can be seen at the Forges des Salles (on the border with Morbihan), where a 19th century charcoal producing village has been preserved unchanged since 1877.

You can visit the ruins of the cistercian Abbey Notre-Dame de Bon-Repos here at Saint-Gelven.

Because the coast in the Cotes d'Armor is so extensive we can't hope to do justice to every beach and cove - there are hundreds of them and you will certainly find your own favourites when you visit - so here we mention only selected highlights along the coast - see the Brittany seaside guide for more details.

Map of Cotes-d'Armor and places nearby