The coast of Brittany is very beautiful, with a perfect mix of white sandy beaches suitable for swimming, attractive rocky coves and pools to explore, and dramatic cliffs and rock formations to enjoy. Off the coast there are several islands that are also a pleasure to explore.

Many visitors to France like to explore the coast of Brittany, enjoying the expansive beaches, collecting mussels in a small cove, watching their children playing in the rock pools, visiting the traditional ports and villages...and many visitors return year after year, a tribute to the appeal and beauty of the region.

Where to start? The Brittany coastline is very diverse - and more importantly it is more than 1000 miles long, so while it is certain the perfect beach, coastal footpath or secluded cove is here for you somewhere it might take a while to find it! 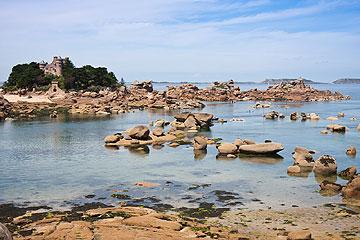 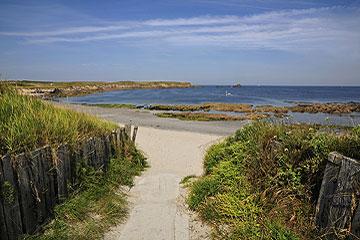 The Brittany coast is second in popularity in France only to the Cote d'Azur - and it is much easier to find a quiet corner for yourself in Brittany than on the crowded beaches of the Riviera - although the weather is slightly less reliable!

In order to tempt visitors to Brittany some of the coastal regions here have been given 'romantic' names, and we have used these when exploring each section of the coast.

The islands just off mainland Brittany also form a large part of the attraction of the coast and finding time to explore one or two should be part of your visit. From the larger islands such as Belle-Ile to tiny islets like St-Cado - each have something different to offer and to enjoy, and most are accessible on boat trips from nearby ports. 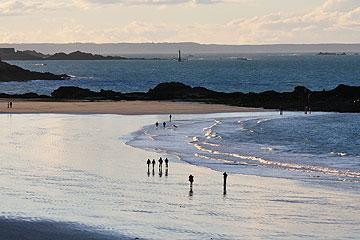 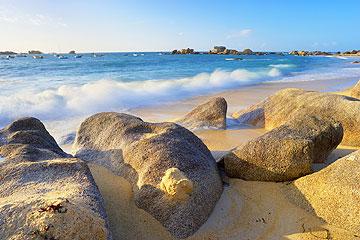 Starting from north-east Brittany and following around the coast of the peninsula until we reach south-west Brittany (as followed if you are taking an anti-clockwise driving tour of Brittany) these are as follows:

Dinard beach is very popular, as are the beaches around the Cap d'Erquy (north-west of Dinan) which are also in a very scenic setting.

The Cote de Granit Rose is at the north of the Cotes d'Armor region around Perros-Guirec, and Cap-Fréhel. See also nearby Fort la Latte and Tregastel.

Islands of interest off the northern coast include Ile Bréhat (north of Paimpol) and Ile Batz.

The beaches at Saint-Cast-le Guildo, between Cap-Frehel and Saint-Jacut-de-la-Mer are very attractive and also have easy access to the lovely coast walk to Cap-Frehel itself.

The beaches along the Granit Coast near Perros-Guirec and also the scenery they provide make them highly recommended e.g. Ploumanac'h. The 'Grande Plage' in Lannion Bay is also popular with families. Further west we enjoyed the beaches at Brignonan-Plage.

Pass by Locquirec to enter Finistere and western Brittany with highlights such as Benodet and including Morgat and the dramatic coastline of the Crozon Peninsula around Crozon to the far west of the peninsula.

The Finistere coastline seems to have escaped a romantic name but is equally impressive all the same!

Popular islands to the west of Finistere include Molène and Ouessant and Ile-de-Sein (listed under 'classified most beautiful villages'), while further to the south you can visit the Glénan archipelago with the Ile de Glénan.

The beaches near Audierne are among our favourites in Finistere and the town itself a pleasure to explore. Douarnenez is also popular, and there are attractive if slightly hard to reach beaches at the far west of the Crozon peninsula.

Heading east along the southern coast of Brittany you pass the Quiberon peninsula (and Carnac) to reach the Gulf of Morbihan. The Morbihan Gulf has access to the islands of Ile d'Arz and Ile aux Moines

Islands off the coast of southern Brittany in Morbihan include Belle-Ile-en-Mer, Ile Houat and Ile de Groix, and the tiny island at St-Cado.

Carnac is best known for the standing stones, but don't overlook the pleasant beaches at Carnac Plage. The beaches along the Quiberon peninsula are usually less busy than many in Brittany. On the Ile-de-Groix the 'Grands Sables' beach to the east of the island is highly recommended.

Note: for a travel guide for Brittany or for detailed visitor information about each department in Brittany see Brittany travel guide