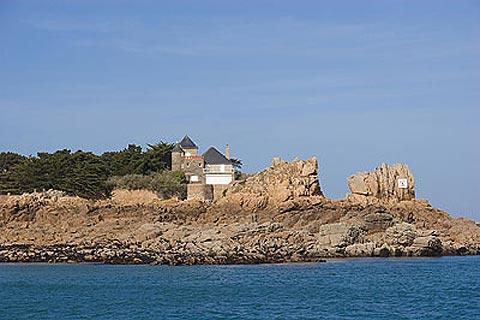 Situated on the northern coast of Brittany in the Cotes d'Armor department, Brehat is a small island affectionately known as the 'Island of Flowers' just off the coast from Paimpol. The setting of the trees and flowers against the backdrop of the pink granite of the island makes a very attractive combination.

Strictly speaking Ile de Brehat is two islands, of roughly equal size, that are connected by a bridge built by Vauban, the French military engineer. There are also numerous smaller islands just off the coast and in the same group, such as Ile Beniguet, the island you can see to the west. Together the group of islands is called the Brehat archipelago.

The northern island is predominantly a landscape of heather and gorse landscape, while the southern island is more Mediterranean in character, with exotic plants able to grow here because of the warm micro-climate on the island - you will see many plants and flowers such as yuccas and mimosas that you more commonly associate with your trips to the south of France. 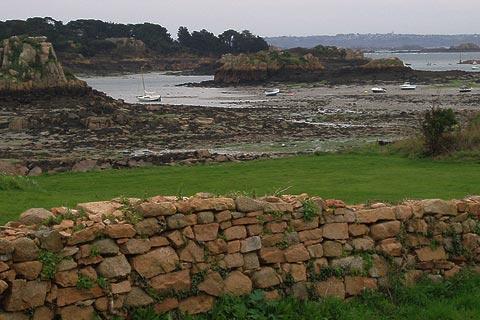 The coast line around Ile-de-Brehat is especially varied, with small ports and beaches giving way to dramatic red cliffs and jagged islands jutting out of the sea, and many lovely views along the coast and across to the small neighbouring islands. The ferry drops you off at Port Clos, an inlet on the southern edge of Ile de Brehat, surrounded by attractive villas and gardens that would look more at home in the south of France than on an island off northern Brittany!

A tour of the island, can be made by bicycle or on foot - the southern island is the most easily accessible. Even walking doesn't take too long, perhaps two-three hours to complete the walk around the island (the time depends how many side paths you set off to explore).

The highlights you should see include a 19th century fort and a nearby glassworks to the south-west of Brehat and an attractive little tidal mill called the Moulin du Birlot on the western coast. The nearby Chapel Saint-Michel is especially notable for the views from the chapel, which stands relatively high on a small hill - although high on Ile de Bréhat is only 26 metres altitude!

Of course you will also want to visit the town of Bréhat, called Le Bourg, which has basic facilities and a 12th century church (much modified in the 18th century) and lots of flowers if you visit in high season. A hundred years ago the town was a centre for post-impressionist artists, attracting among others both Gauguin and Matisse, and also has a reputation for inspiring writers and poets.

Nearby Guerzido beach is a popular beach in a bay that is sheltered from the strong winds that can affect much of the Brittany coast.

On the northern island you can see another small 19th century chapel, and also the Paon lighthouse, standing high on a raised rock peninsula jutting into the sea. The current lighthouse was built after World War Two to replace the 19th century lighthouse in the same location that had been destroyed by the Nazis.

A legend tells that if a young lady throws a flat pebble into the sea from the two large rocks near the lighthouse, the number of bounces made by the stone is the number of years until the girl will get married. 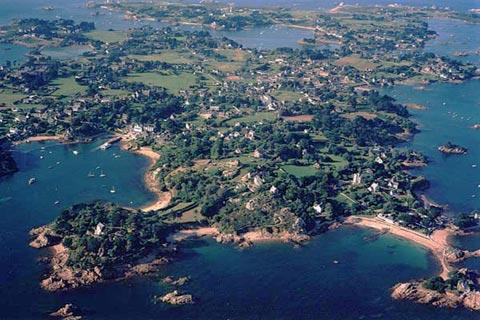 Ferries to Ile-de-Brehat leave from the port at Ploubazlanec, just outside Paimpol. The ferry crossing only takes about 10 minutes, although for a higher charge you can take a boat that travels around the island first before dropping you off, so about 45 minutes long and a lovely way to see the coast of the Ile-de-Brehat.

Map of Ile Brehat and places nearby

Visit near Ile Brehat with France This Way reviews

The French version of this page is at Ile Brehat (Francais)