The cathedral in Treguier - a small town in the north of Brittany - is in the town centre, and the highlight of your visit to the town.

France This Way comment: Treguier cathedral is quite impressive in its own right, and it also has one of the most beautiful gothic cloisters in France so a visit is recommended when you are in the area.

As is common with ancient churches, the cathedral in Treguier has been altered over the centuries, and when you visit today you see parts from each of these different periods. The oldest part dates from the 12th century and includes Hastings Tower, the part of the cathedral near the entrance to the sacristy and cloister. The capital stones in this part of the church feature Celtic designs.

The Hastings Tower is one of the three towers of the cathedral, although it is not easy to find a position where you can see all three at the same time: the cloisters and Treguier Town Hall have the best overall views of the building. The most recent tower is the one with the spire, rebuilt in 1787. 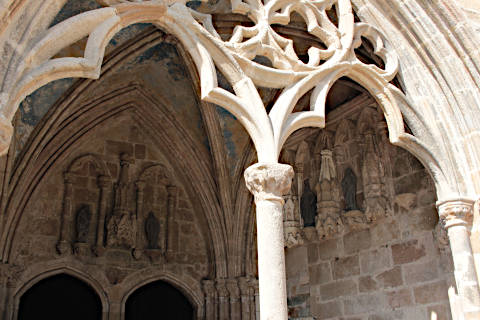 The main part of the cathedral was built in the 14th century and includes the nave and choir sections that you can see today. The building took a long time, in part because of delays caused first by the Hundrd Years War and then by the War of the Breton Succession. Unlike those from the earlier period, the capital stones from this period sometimes feature strange invented characters called caryatids.

Further additions in the 15th century (to the left of the Hastings Tower) include the belltower, the Duke's Chapel and the cloister. These are in the more elaborate style called the flamboyant gothic style.

There are several interesting items to be seen in the cathedral including a 16th century statue of Christ, several other statues and some medieval tombs. It is rather hard to see but there is also a unusual frieze around the nave above the arches that separate it from the side-aisles, and the carving of the wood in the stalls is also very impressive.

Another interesting feature in Treguier cathedral is the cenotaph of Saint-Yves, a Saint who died in 1303. This is a very ornate structure incorporating several statues and two arches around the tomb of Saint-Yves, built in the late 19th century to replace the original (the original tomb was also destroyed during the revolution).

The cloister was built attached to the north side of the cathedral during the period 1450 - 1468. The cloister is still intact and has 48 separate arcades supported by columns and each with the same 'four leaf clover' design. This decorative style is called the gothic flamboyant style.

In the arcades around the edge of the cloister you can see several more statues and ancient tombstones, which further add to its charm.

We visit many cathedrals and cloisters as we travel around France, and it is unusual that attention is paid to the garden area enclosed by the cloister. In Treguier cathedral the garden is quite simple but beautifully maintained and with several flowers. Not as splendid as the cloister of Cadouin abbey that we visited in the Dordogne recently, and the stonework is less impressive that the cloister in Moissac abbey but certainly among our favourites.

Note that to enter the cathedral is free but there is a small charge (two euros when we visited) to enter the cloister: it has a separate entrance, to the side of the cathedral. The cloister is open from April to October, 10.30 - 18.30, but closed for lunch from 12.30 - 14.30 outside July and August. 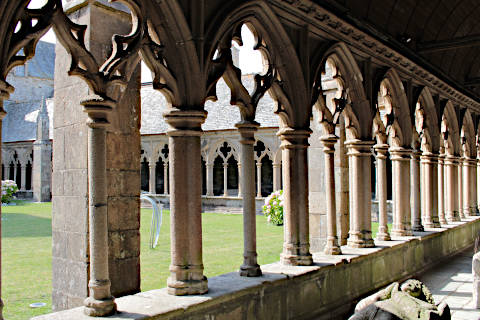 The cathedral is in the Place du Martray in the centre of Tréguier, and in the same square and along the Rue Ernest Renan you can see numerous medieval houses.

Most visitors will be in this part of the Cotes d'Armor department to explore the Coast of Granite Rose around Perros-Guirec and Tregastel. You can also see more cathedrals in France.

Map of Treguier cathedral and places nearby

Visit near Treguier cathedral with France This Way reviews

The French version of this page is at Treguier cathedral (Francais)