The town of Dinan is in the north-eastern part of Brittany, in the Cotes-d'Or department to the south of Saint-Malo and Dinard.

France This Way comment: a highlight of a visit to Brittany, Dinan is a very impressive walled town set on a hillside overlooking the river Rance. It is one of our favourite towns in Brittany and definitely not to be missed.

Go to the tourist office in Dinan when you arrive (at 6 Rue du Chateau) as they can give you leaflets with colour-coded walks to ensure you see everything Dinan has to offer. You will also have a chance to see the impressive 16th century townhouse where the Tourist Office have managed to establish themselves!

The ramparts surrounding the town are more or less intact, and cover almost three kilometres. They were built in the 13th century when the Dukes of Brittany decide Dinan should be an important market town, and still retain 10 original towers and four original doors.

These ramparts are a good place to start your visit to Dinan and although there is only one small section where you can walk on the ramparts, you can often follow next to them enjoying the views - through the Promenade des Grand Fosses or along the promenade de la Duchesse Anne for example. 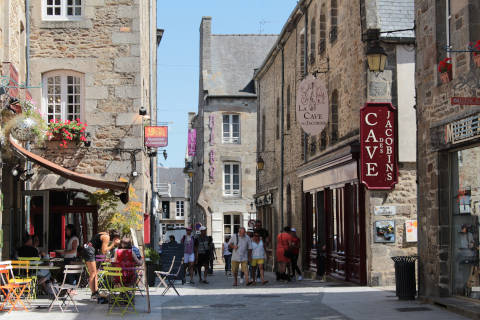 Dinan Chateau, one of the most imposing monuments in the town, is also part of the ramparts that surround the town: it is to the south of Dinan centre, close to the tourist office. In the 'donjon' ('keep' or 'dungeon') of the castle, built in 1384, you can visit the kitchens and other rooms with the town museum. See Dinan chateau for details.

You can now carry on into the extensive historical centre of Dinan, radiating out around Place des Merciers and Place Saint Sauveur and along Rue du Jerzual. This is a very nice area of the town just to wander around, stopping off for the occasional traditional crepe (pancake) of course.

As you amble through the medieval heart of the town admiring the ancient half-timbered houses you will come across various places of interest including a very large number of beautiful medieval houses, perhaps more than we have seen in any other town ifn France, that make the historic centre of Dinan so interesting.

In the north-east of the town on Grande Rue, the Dinan Church of Saint-Malo is in a mix of renaissance and gothic styles and has some interesting modern stained glass windows inside although the renaissance style doorway is the main feature of interest.

Most of the convent was built in the 14th and 15th centuries by the Franciscan monks, who continued to live here untl religious monasteries were all closed after the revolution.

In the east of Dinan there is another important religious monument: the basilica of Saint-Sauveur. This is an interesting mix of roman and gothic styles and worth a visit: the carvings around the roman style doorway are among the highlights. The heart of Bertrand Du Guesclin - saviour of the town in a battle against the English - is buried here.

Remember to stroll around the outside of the building: there is a garden behind the basilica that has views across the river and valley beyond, then a short distance east you can climb the 13th century Tour Sainte-Catherine for even better views.

Elsewhere in the centre of Dinan you can visit the Tour de l'horloge - a 15th century clock tower. It is easy to find because it dominates the town centre and you can go up inside the tower for the best views across the rooftops of Dinan. The tower is 43 metres high, and at ground floor you can see the original mechanism for the clock from the 15th century. 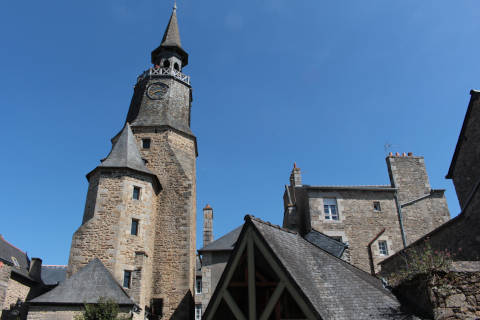 As reward for these many historic monuments Dinan is listed as a 'ville et pays d'art et d'histoire', a classification reserved for towns and regions that demonstrate they are trying to make the most of their setting, attractiveness and architecture.

After exploring the historic centre you can continue north along Rue du Jerzual in Dinan and also continue into Rue du Petit-Fort that descends the hill from the north-east of the town towards the port. These streets together make for one of the most remarkable medieval streets we have seen although the route is often very steep, up to 33% gradient, so walking down to the port is much qucker than walking back from the port.

Along the Rue du Petit Port you will pass the the Maison du Gouverner, one of the oldest houses in Dinan and which is open to the public so you can visit the inside, as well as see the Porte du Jerzual, a an ancient gateway through the ramparts.

In the port area of Dinan you can cross the bridge for a good view as you turn and look back at the town. The port is also an excellent spot for lunch with a good selection of restaurants, perhaps before taking a boat trip along the Rance or enjoying a promenade. 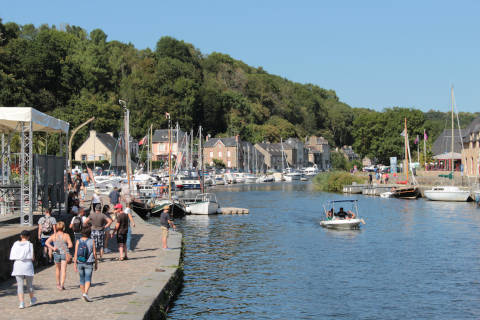 There is a great deal to discover near Dinan, either heading along the Rance to the north to the Normandy coast or exploring the other towns and villages in the surrounding countryside. The benedictine monastery at Saint-Magloire de Léhon has been here since the 9th century and is one of the most visited attractions near Dinan.

Among our favourite destinations near Dinan we recommend you visit the coast town at Dinard and the small town of Dol-de-Bretagne, which has an impressive historical centre.

Map of Dinan and places nearby

Visit near Dinan with France This Way reviews

Plan your visit to Dinan, Cotes-d'Armor

Regular market(s) are held in Dinan each Thursday. (Markets are held in the morning unless stated.)

The French version of this page is at Dinan (Francais)