The church of Saint-Malo is one of the most important historic monuments in the town of Dinan, a charming town in north-west Brittany.

Explore the Church of Saint-Malo in Dinan

France This Way comment: although substantially transformed over the centuries, the church of Saint-Malo has some interesting features including the entrance, the stained glass windows and the treasury.

The church of Saint-Malo in Dinan has its origins in the 12th century, although the current church was built in the 15th century.

The original church of Saint-Malo was destroyed because the Duke of Brittany thought the French (who were at war with Brittany at that time) could use it as a defensive church when attacking the town. The chapel of Saint-Joachim can be seen on Boulevard Flaud in the position of the original church.

At that time there were two principal churches here because Dinan was divided between two different lords, Olivier II and Alain I (the other is the Church of Saint-Sauveur, that you will also see in the town centre). 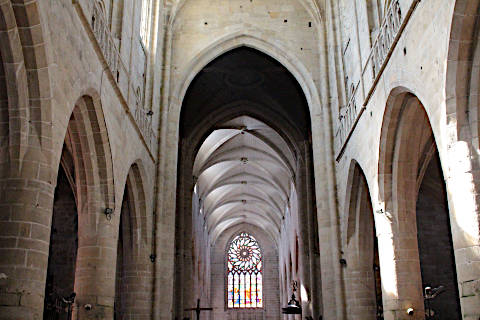 The church of Saint-Malo was rebuilt inside the city walls in the 15th century, started by the Duke of Brittany then partly completed by the French after they had won the war.

Due to interruptions caused by the lack of money and the Wars of Religion work on the Church of Saint-Malo stopped and restarted on several occasions, with some parts completed in the 18th century, and the remainder finally finished in the 19th century after the church was neglected following the revolution. The final plan largely followed the original 15th century plans.

The two doorways of the entrance are separated by three ionic columns with vertical grooves, in the granite of the region. There is a decorative frieze above the doors with two triangles above (these are called frontons, and an idea taken from the design of the facade of classical temples). These each contain carved shells, a symbol of the pilgrim.

At the rear of the church of Saint-Malo in Dinan you can see the three chapels around the chevet, each with stone pinions and triangles separated by gargoyles that add an attractive appearance, but rather complicated to appreciate because every flying buttress also has a small decorative tower.

More carved stonework can be seen in several places, including the stone altar, the frieze in the triforium (the triforium is the part of the walls of the nave above the arches), and in the ceiling of the ambulatory (the passage behind the altar at the rear of the church).

The stained glass windows are also interesting and very attractive given their recent fabrication, some represent religious subjects and others show local events such as Anne of Brittany entering Dinan. These windows were added in the 19th and early 20th century. 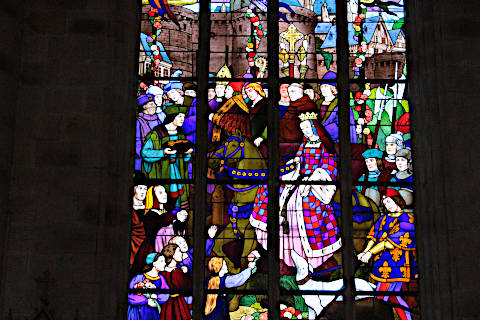 It is interesting to also visit the Church of Saint-Sauveur while you explore Dinan (one of our favourite historic towns in France), as well as explore the historic centre, visit the Chateau of Dinan and follow Rue du Jerzual to the port: see Dinan for all information.

Photos of Dinan church of Saint-Malo

Map of Dinan church of Saint-Malo and places nearby

Plan your visit to Dinan church of Saint-Malo, Cotes-d'Armor