The basilica of Notre-Dame-de-Bon-Secours is the principal monument in the market town of Guingamp, a market town in the eastern part of the Cotes d'Armor department of Brittany.

France This Way comment: we don't often include a separate feature for the many churches we visit across France, but the basilica in Guingamp is the most important monument in the town and has several interesting characteristics including a statue of the black Virgin that has attracted pilgrims for many centuries so we wanted to be sure you noticed it!

The basilica is situated in the southern part of the historic centre in Guingamp, just outside the main square but easy to find because it is the tallest building and can be seen from everywhere in the town centre.

History of the Basilica in Guingamp

The oldest parts of the building date from the 11th century, but there are only a few fragments around the transept remaining from the original church and almost every century since that time has seen modifications to the building.

The north part of the nave and the clocktower are among the oldest parts of the basilica and date from the 13th century, the choir area from the 14th century and the chevet from the 15th century. In the 16th century the south side-aisle was completed and the Renaissance Tower was built and in which you can clearly see the renaissance style of the time.

Further modifications followed, including a major restoration in the 19th century, and the spire was rebuilt after being destroyed during the second world war.

The principal building is in the gothic style, with tall and pointed stone arches separating the different parts of the church. Like many churches in Brittany, the flying buttresses have become an element of internal decoration, rather that an external support as usually seen in gothic churches, which makes the inside very attractive.

The doorways are among the most interesting features of the basilica and as well as the main entrance with its numerous arches and statues in a multitude of expressions these include the Portail Saint-Jeanne and Portail Notre-Dame on the north side of the church and the Porte au Duc on the south side.

The Portail Notre-Dame features three small rose windows overlooked by two gargoyles, and the other doorways have two doors inside a gothic style arch with stained glass windows above.

Highlights inside the basilica of Guingamp

As soon as you enter the basilica you can see that there are numerous statues and works of art, including statues on the stone columns that separate the nave from the side aisles, so here we just mention a few of the highlights to help make your exploring more interesting...

It is true that many of the statues and ornaments are additions from the 19th century and perhaps not great artworks individually, but overall they create a very charming interior.

There are several chapels in the basilica. The principal chapel, and a reason that many visitors come here, is the Chapel of the Black Virgin on the north side of the basilica. The statue of the black Virgin and infant Jesus is ancient although its origins are unclear, and in the 17th century was a major pilgrim destination, because of which parts of the church such as the oratory were expanded.

The rest of this chapel is also interesting: the 12 statues of the apostles that overlook the black Virgin are a 19th century addition, as is the mosaic floor that is made from marble and shows a labyrinth, reminding visitors of the difficult path that must be followed to reach spiritual enlightenment.

The first floor gallery is another highlight, with its intricate stone balcony overlooking the interior of the basilica.

Elsewhere in Guingamp basilica you will see other interesting statues, many with no information provided about their origins - for example there is a charming relief of a mise au tombeau in painted wood but no hint as to its age or origins - so allow time to explore fully. 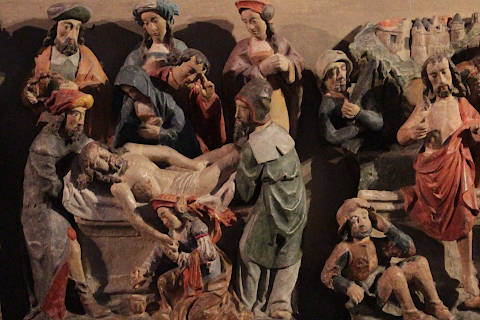 For more monuments and places of interest in and near the town see our Guingamp guide.

Photos of Guingamp Basilica of Notre-Dame-de-Bon-Secours