Lannion is a port town in the Cotes-d'Armor department of northern Brittany, around the estuary of the River Léguer and a few kilometres south of the Granite Rose coast around Perros-Guirec. It is a lively, modern town which generates much of its wealth by the important role it plays in the telecommunications research industry, and has a small historic centre.

Note that Lannion is based around a river port and is actually a few kilometres from the sea.

France This Way comment: Lannion is not a major Cotes d'Armor destination (like nearby Dinan for example) but is pleasant to visit, especially in summer when there are flowers on the bridges and quai and along the stairs to Brelevenez,

Your visit to Lannion will start on the banks of the Léguer, on the Quai d'Aiguillon. This quai was built in the 18th century to prevent the town from flooding and to enable boats easy access to the town centre. It is also now the place where you will find Lannion tourist office, who can provide you wih a map showing the best route to follow as you explore.

Lannion is spread out along the river Leguer with the Monastery of St Anne dominating a large area on the southern side of the river. This part of the town has been modified several times over the centuries and the buildings used for various purposes: they are now used by the local council as a media centre. The most imposing building on this side of the river is the medieval Manoir de Langonaval on Rue de Kérampont.

The heart of the historical town is on the northern side with the lovely medieval buildings based around the Place du Général-Leclerc and the Rue des Chapeliers. Follow the Rue Emile le Taillandier passed the market hall that was built at the beginning of the 20th century: you will see a sign explaining that it was in this square that, until 1847, convicts were exhibited before being transported to Australia!

The most impressive of the ancient buildings are the two adjacent houses on the Place General-Leclerc, the one on the left with a facade in slate and the one on the right a half-timbered house. In Rue des Chapeliers just to the right of here there are more medieval houses, including the house at no. 3 with some 15th century carved timbers.

There are several other 15th and 16th century houses to discover as you explore the narrow streets, such as those in the Rue Geoffrey de Pontblanc, Rue Jean Sauvidan and Rue de Kériavily, several of them with interesting stone carvings and other architectural features.

The Town Hall on this square was built in the 19th century using the materials from the prison and law courts that stood here before and had been demolished. The town market hall also used to be in the centre of this square.

West of Place du General Leclerc, near the town hall, the Venelle des Trois Avocats is a medieval street with large stone houses built by rich lawyers of the epoque. Near here, the Church of Saint-Jean-du-Baly was built in the 16th century to replace the original chapel of the castle that stood here previously, although it has been modified at various times during the centuries.

A little way to the east on Rue Savidan you can see the 17th century classical style Convent of the Ursulines with a chapel and associated buildings that is now used for exhibitions and theatre shows. The lively town centre also has some quaint shops and boutiques where you can buy traditional crafts of Brittany.

The market in Lannion is held on Thursday so this is the best day to visit if possible.

From the old town you can follow a walk that takes you up the Escalier de Brelevenez to the church of Brelevenez at top of the hill of Crec'h Tanet. See guide for Brelevenez.

On one side of the steps is a street of delightful slate rooved cottages, each brimming over with charm and flowers. On the other side there are views over the town. The church is a lovely 12th century Templar church but really it is the walk up the steps themselves (all 140 of them) that is the highlight. 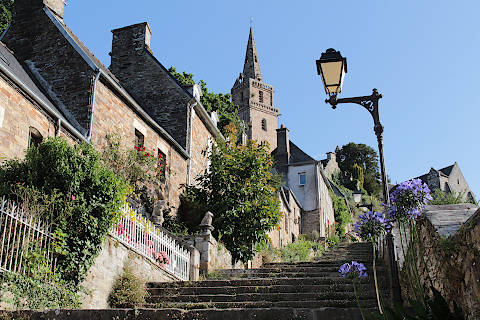 Close to hand there are several beaches to the west around Trebeurden, while the valley of the river Leguer is very picturesque and easily explored on foot or by boat with a canoe or an organised boat trip.

Your children will enjoy a visit to planetarium, telecommunication exhibition and the Gaulois village at Pleumeur-Bodou, a few kilometres north of here.

There are several other places of interest for visitors to Lannion, most along the coast to the north with its sandy beaches and coastal walks through beautiful scenery - Perros-Guirec is the best known of these, and see Coast of Granite Rose for details of others.

Map of Lannion and places nearby

Visit near Lannion with France This Way reviews

Lannion is classified as a village in bloom (ville fleurie) 4*

Plan your visit to Lannion, Cotes-d'Armor

Regular market(s) are held in Lannion each Thursday. (Markets are held in the morning unless stated.)

The French version of this page is at Lannion (Francais)