Saint-Cast-le-Guildo is a small beach resort on the north coast of Brittany and to the west of Dinard.

France This Way comment: very typical of resorts along the coast in the north Cotes-d'Armor area of Brittany, Saint-Cast-le-Guildo is best for those who want a sandy beach and a few shops and restaurants as a place to relax for a few days 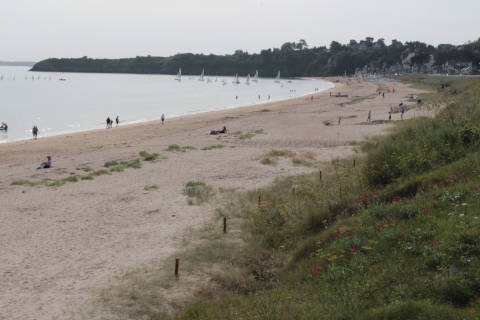 The centre of activity in Saint-Cast-le-Guildo is certanly the beach, which is long and sandy and quite attractive, because of the promontories at either end, that also provide some shelter. Not surprisingly (and perhaps not very originally) it is called the Grande Plage!

In the streets behind the beach, the centre of Saint-Cast-le-Guildo has a reasonable selection of cafes and small shops to explore.

To the north of the centre, the Port of Saint Cast can be reached by foot along the path that follows the coast and is also pleasant to visit while you are in the town. This walk between the port and the town centre is called the Promenade du Soleil Levant, and is enjoyable both day and night as well as sunrise because of the attractive views (the promenade is closed at times of very high tides because the path gets coverd by water).

The tourist office for Saint-Cast-le-Guildo on Place General du Gaulle can provide you with a map that suggests two routes to follow: one is about three kilometres long and explores in and around the town centre, and the other is about eight kilometres long and makes a tour of the Pointe de Saint Cast to the north of the centre.

On the north side of the Pointe de Saint Cast there is a second beach, smaller but very picturesque with rocky outcrops at both ends, called the Plage de la Mare. Follow Rue du Sémaphore and Rue de la Mare north from the centre of Saint-Cast-le-Guildo to get here. From this beach you look across the bay to the Fort de la Latte. 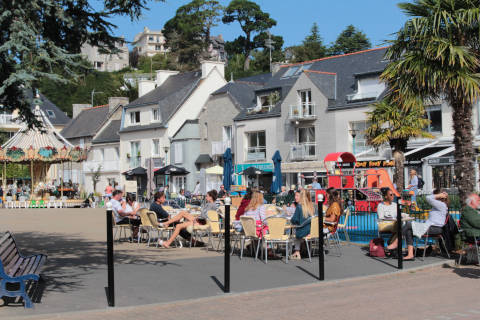 There is a golf course, the Golf du pen-Guen, on the coast to the south of the town.

The Fort la Latte is a well restored castle on the headland to the north of the town and the principal historic monument nearby. Built in the 14th century, the fort has lots of interesting characteristics as well as some formal gardens in the castle courtyard..

The headland at Cap-Fréhel is one of our favourite viewpoints on the north coast of Brittany, and also to the north-west from the town.

There are several other small resorts along the coast here, but certainly the most popular and the most charming is Dinard, about 15 kilometres to the east of Saint-Cast-le-Guildo. To the south of Dinard, the historic town of Dinan is one of our favourite towns in France.

Map of Saint-Cast-le-Guildo and places nearby

Visit near Saint-Cast-le-Guildo with France This Way reviews

A seasonal market is held in Saint-Cast-le-Guildo on Monday. (Markets are held in the morning unless stated.)