Pedernec is a small village in the north part of the Cotes-d'Armor department of Brittany, between Guingamp and Lannion.

France This Way comment: the village centre is very small - just a church and a few streets of houses - but it is pretty, and your visit will also include a trip to the hilltop at Ménez Bré 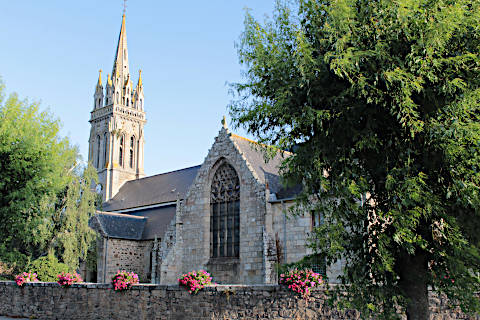 From the side and the rear, the Church of Saint-Pierre in Pédernec is a lovely church built of stone that has a lot of period character. Unfortunately the front of the church has been replaced at some time (in the 19th century I think) with a much less interesting facade and tower, but the remainder is still charming!

Also in the centre of the village, there is an open square with a war memorial and a small hall.

There is a bakers on Rue de Guingamp, a small general store on the same road as you head north from Pédernec, and a bar-restaurant near the church but otherwise little to detain you. These were all closed when we visited but I think we were just unlucky with our time of visit!

If you walk about 200 metres south from the centre of Pedernec along the Rue de Lorette you reach a small chapel that has interesting carved doors as well as engravings and ancient statues on the walls near the doors.

At Ménez Bré, a hill about five kilometres south-west of Pédernec and at 302 metres above sea level, you have very lovely views across the countryside in all directions.

On the hilltop you also have the chance to see the Chapel Saint-Hervé, one of the most interesting monuments in Pédernec. This is a charming chapel, made of large blocks of stone and rebuilt in the 16th century on the site of an older chapel. In recent years further improvements have been carried out including new stained glass windows and bells.

Also just outside the village (to the north-west, near Trévourec) there is an impressive standing stone called the Menhir de Minhir (or Crec'h-Coulm). The stone is almost seven metres high and is thought to have once been part of a circle of similar stones. 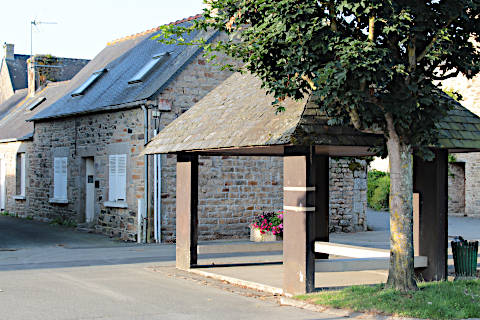 Map of Pedernec and places nearby

Visit near Pedernec with France This Way reviews

The French version of this page is at Pedernec (Francais)