Pleumeur-Bodou is a small town and several villages on the north coast of Brittany, in the Cotes-d'Armor department near Lannion and Perros-Guirec.

France This Way comment: the town of Pleumeur-Bodou is small, with visitors attracted here above all because of the attractions in the surrounding area and on the coast at the north edge of Pleumeur-Bodou, rather than the town itself 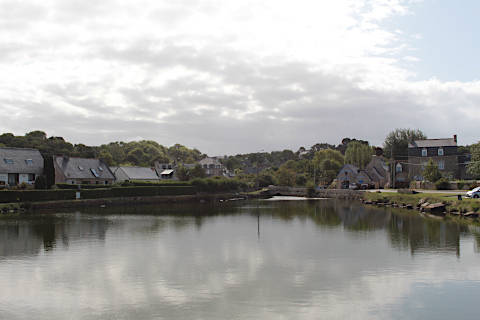 Ploumeur-Boudou town is centred around its church and presbytery, with the surrounding streets having lots of traditional stone houses and a few shops and cafes. The church was built in the 19th century to replace an earlier church that had become too small, but incorporates styles from traditional Brittany churches and is quite attractive.

There are also several chapels in the surrounding area, each less than about four kilometres from the town, although all in different directions. They are all quite pretty and interesting to see:

Close to the Chapel of Saint-Uzec you can see a tall standing stone, a block of granite about seven metres high, and decorated with a cross with a statue of Jesus and various engravings that were added in 1674.

The coast in Pleumeur-Bodou is a mix of small beaches and marshes, which is quite attractive but perhaps not the best beaches in the region. There is a nature trail that starts from the coast road at Le Grand Quellen and explores the marshes with their rich natural habitat and includes an observatory next to a lake.

In the sea to the north of Pleumeur-Bodou, the Île-Grande is about one kilometre across and can be reached by a road bridge. The island was once a successful granite quarry and you can stilll see the granite workings when you visit. About 800 people live on the island.

The island has a lot of attractive scenery, including rocky coast and small beaches, that is best appreciated if you follow the coast path that is about seven kilometres long. Note that this quite a different experience between high tide and low tide (the sea is rather distant).

The Church of Saint-Marc on l'Île Grande is quite pretty, and built of large blocks of stone. There is also a prehistoric monument on the island - the "allée couverte de l'Île grande" - which is a covered tunnel that is eight metres long and still has its roof. The main viewpoint across the sea is about 200 metres north of this monument. 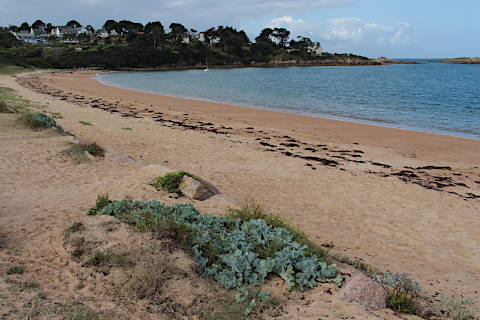 There are three tourist attractions close to each other in the Parc du Radôme about two kilometres north of the Pleumeur-Bodou town centre (tickets to buy separately or as a combined ticket for all three), targeted at children around 5 - 12 years old but reasonably entertaining and instructve for adults as well:

- Village Gaulois: recreation of a Gaulois village with traditional huts and lots of activities

- Planetarium of Brittany: quite a recent planetarium with several different spectacles, mostly related to stars and planets but also including one about dinosaurs. Most are narrated in French but the year we visited there was a show each Friday at 13.00 in English.

The town of Lannion is just a few kilometres south of Pleumeur-Bodou, and to the north you can visit Perros-Guirec, Tregastel and other resorts along the beautiful Coast of Granite Rose of Brittany.

Map of Pleumeur-Bodou and places nearby

Visit near Pleumeur-Bodou with France This Way reviews

The French version of this page is at Pleumeur-Bodou (Francais)