The Rue du Jerzual and Rue du Petit Fort are two streets in the centre of Dinan, the important historic town on the Rance river in the Cotes-d'Armor department of north-east Brittany.

Explore the Rue du Jerzual and port in Dinan

After you have explored the historic centre of Dinan, there is another street outside the centre that you will definitely want to explore during your visit to the town: the Rue du Jeruzal, that starts near the Convent of the Cordeliers. Allow at least an hour, preferably a whole morning or afternoon, because this is quite a long and steep road with lots of buildings, monuments, shops and cafes to distract you.

France This Way comment: together with the Rue du Petit Fort, the Rue du Jerzual in Dinan is an exceptional street of medieval houses between the town centre and the port on the Rance: unmissable! 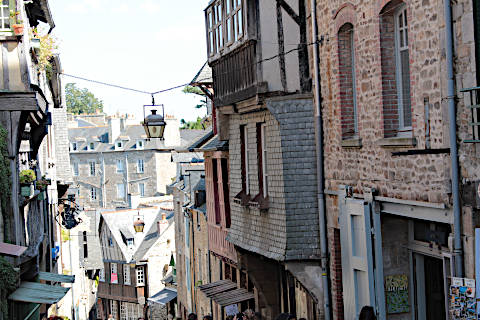 It is useful to know that this street reaches gradients up to about 33%, and most of it is cobbled, so visitors with mobility problems or in a wheelchair will have significant challenges.

As you follow Rue du Jerzual, after a while you reach the ramparts, and pass through an old stone arch called the Porte du Jerzual. This gateway to the town was built in the 14th century in the base of a tower and once formed part of the defences of Dinan. In later years a drawbridge was also added here, to further strngthen the town defences.

The road beyond this point is called the Rue du Petit Fort, and next to the arch you can walk up onto the ramparts for a very impressive view across the Rance valley. Both of the roads are pedestrianised which also helps make the route more authentically medieval in character.

The most important building on the Rue du Petit Fort in Dinan is the Maison du Gouverneur, built in the 15th century and with colombage on three sides. Inside, the building is quite simple, and had a kitchen, storage area and a shop at ground level. It is thought that the upper levels were rented out as apartments.

All along the Rue du Petit Fort you can see impressive medieval houses, some half-timbered, some with slate fronts, some white and others painted in bright colours. Truly a quite remarkable street, and it continues to the port of Dinan on the Rance river.

The port is another highlight of your visit to Dinan, although you could think that you are in a different town. The Rance here is overlooked by a large viaduct and a quaint stone bridge - you can walk across the bridge to get a nice view back across the port and to Dinan.

You can walk along the promenade next to the Rance river, seeing all the small boats, as well as organise boat trips along the river. If you cross the bridge, the footpath also continues under the viaduct and along the riverside towards the south-east of Dinan.

The port is quite a relaxing part of Dinan to explore before you start the steep walk back to Dinan town centre, and there are also several cafes. 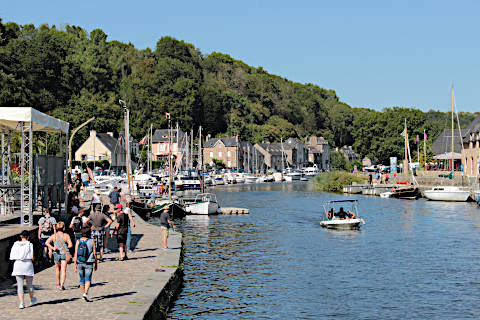 There are numerous interesting buildings to see in Dinan, including two large churches and the chateau de Dinan as well as a substantial medieval town centre: see the Dinan guide for full information.

Map of Dinan Rue du Jerzual and places nearby