The basilica of Saint-Sauveur is a short distance east of the historic centre of Dinan, next to the Place Saint-Sauveur. The church was designated as a basilica during the 20th century because of the presence of a relief of the Assumption of the Virgin, dating from the 15th century and making the church a destination for pilgrims to Dinan.

Explore the church of Saint-Sauveur in Dinan

France This Way comment: the church of Saint-Sauveur has several interesting features, including a roman style facade built in the 12th century, and is interesting to visit

The church of Saint-Sauveur in Dinan has its origins in the early 12th century, around 1123. The town has two important churches built at that time - the other is the Church of Saint-Malo that you will also see during your visit. Two churches were built because control of the town at that time was divided between two lords, Alain I and Olivier II. 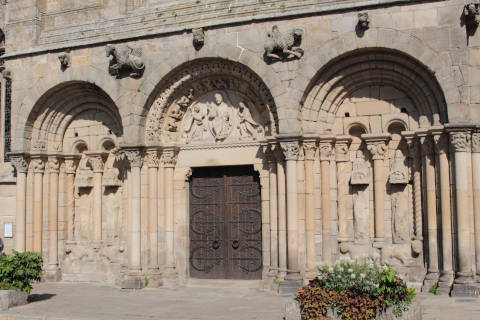 The original church of Saint-Sauveur was smaller and it was in the 15th century that it was enlarged to its present size, with the addition of two transepts, a side nave to the north and a choir area. The original church of Saint-Sauveur was in the roman style, and the 15th century modifications are in the flamboyant gothic style.

The parts that remain of the original roman style building are therefore the lower part of the facade and the south wall of the nave.

This original entrance is perhaps the highlight of a visit to the basilica of Saint-Sauveur. You can see three romanesque arches, each with several columns and carved capital stones. The side arches are blind arches that contain two statues each that represent the saints, although these were severely damaged during the wars of religion.

Above the main door is a biblical statue and there are also two statues of winged animals.

The higher part of the facade is in the later gothic style, and was also added during the expansion of the church in the 15th century. The south wall of the church is also from the 12th century and has a series of blind arches separated by columns.

Inside, the church of Saint-Sauveur has a traditional cross layout with a transept (although it only has one side nave), and an apse with five chapels.

The main walls, because they were built at different times, are quite different in style. The older wall (the south wall, on your right when you enter the basilica) has numerous romanesque arches, all closed on the lower level but several open with stained-glass windows on the upper level, as well as corinthian style columns. The left wall has a series of large, gothic style arches to separate the main nave from the side nave.

The stained glass windows are not very old, with most added n the 19th and 20th centuries, but are interesting to see. The most noteworthy is a window showing the four evangelists and four saints from Brittany in one of the chapels in the side nave. Elsewhere in the basilica you can see various artworks, statues and the main altar. 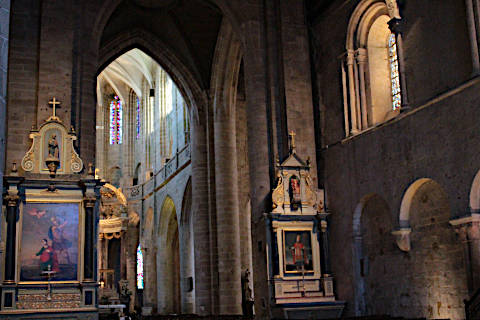 Behind the basilica of Saint-Sauveur there is an English style garden, with impressive views across Dinan and the Rance valley.

The basilica of Saint-Sauveur is near the historic centre of Dinan, which has lots of impressive medieval buildings, and is close to the Rue du Jerzual which leads to the port on the Rance river below the church and is a quite remarkable street of medieval houses. You can also visit the second historic church in the town, the Dinan church of Saint-Malo. See the Dinan guide for more ideas.

Photos of Dinan basilica of Saint-Sauveur

Map of Dinan basilica of Saint-Sauveur and places nearby

Plan your visit to Dinan basilica of Saint-Sauveur, Cotes-d'Armor